I’ve been exercising with soldering lately. I thought things were going wonderfully at first and I made a few fully soldered pompoms. Unfortunately, after a week they started to corrode and after a month parts started falling off. Repairs didn’t work and even superglue did no longer adhere to the metal at all (this never happened before!). I used the corrosion-free Tix flux that may have been the problem, either as I didn’t clean the parts properly afterwards or it simply isn’t corrosion free as some modelers on railroading forums claim? I don’t know really, but after a period of mourning for my pompoms I gathered my strength and I replaced all my soldering equipment and consumables. I finally found a nice Australian web shop called DCC Concepts with a nice how-to on soldering and their own range of solders and fluxes. They claim to have a no-clean non-toxic flux that I wanted to try and this solder/flux from DCC works really well. In the beginning I had some trouble as it didn’t run as smoothly as the Aber/Tix combination; however, that combination ran so well it ended up in a very very thin layer and a poor bond. I just have to be a bit more careful in the amount of solder I add for each joint.

I practiced on a new batch of cordage and hawser reels before trying the far more complicated pompom. I already made a batch but I had so much trouble gluing these parts together. If some part broke off during the final stages of construction, I really couldn’t repair it and had to start over. Understandably, the failure rate was very high. 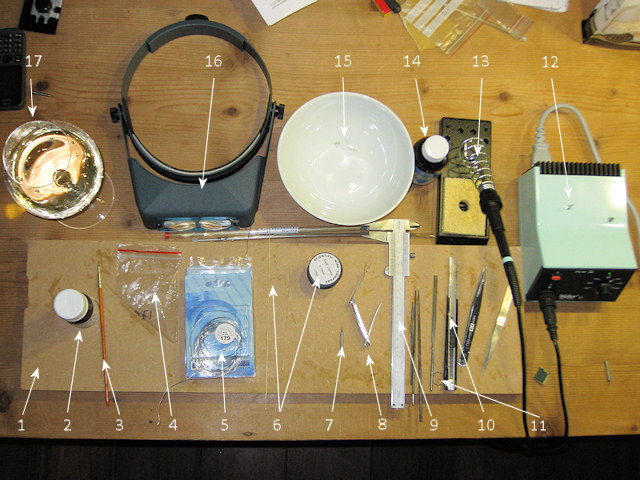 1. Piece of MDF used as a disposable workbench.
2. Bottle of flux secured in a hole drilled in the MDF. It does really help avoid knocking the bottle, which I did when working with the Tix flux earlier (Staining the modelling table). The first day I constantly found myself wanted to shift the position of the bottle but now I’m used to it not being able to move.
3. An old brush for applying the flux.
4. A bag of parts to be soldered.
5. The DCC Saphire solder.
6. Stock rod, tube, and wire. This brass from Scientific Wire can actually be soldered, in contrast to winding wire I bought that has a coating.
7. A drill to open freshly cut tubing.
8. A toe-nail clipper for cutting (thin) rod and wire.
9. Calliper.
10. Assortment of files, knifes and tweezers.
11. Part storage area outline.
12. Soldering station by Weller with a variable iron temperature.
13. Soldering iron with the finest tip in the Weller assortment of fine tips.
14. Alcohol for pre/post soldering cleaning.
15. Bowl with alcohol to finished parts.
16. Maximum magnification Optivisor to check the bonds and quality of filing and such.
17. Tramin 2011 Pinot Grigio from the Alto Adige. Hensel 2011 Grauer Burgunder will also work. Soothes the nerves before soldering, dampens disappointment when parts spontaneously disintegrate, raises spirits when things finally go according to plan. 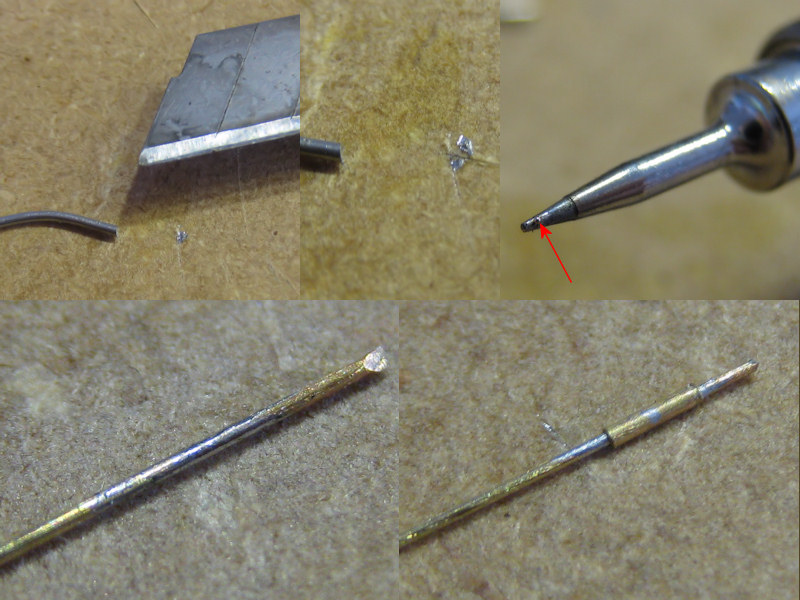 Now, I am not going to follow all the advice normally given for soldering work. For instance, I do not have an abrasive pen to clean the parts as the parts are much too small; holding them without damage is enough of a challenge already. Pre-tinning a part is often risky as you can clog delicate parts but sometimes works. You also can’t really pre-tin the soldering tip because the amount of solder you need is so small. Top-left shows a tiny chafing chipped from the solder. Now, slice is halved, and if necessary cut it two again. You can pick up the solder with the tip of the iron; you can see a tiny bead (top right. note that this is the smallest soldering iron tip that Weller sells with a 0.4mm tip). This works very well for applying a minute amount of solder that is sometimes already a bit too much. The bottom images show a tiny 0.5mm tube soldered to a 0.3mm wire; the wire centers the etched parts and the tube acts a spacer. I add flux to the wire, pre-tin the wire (no harm here), slide over the tube and add heat. 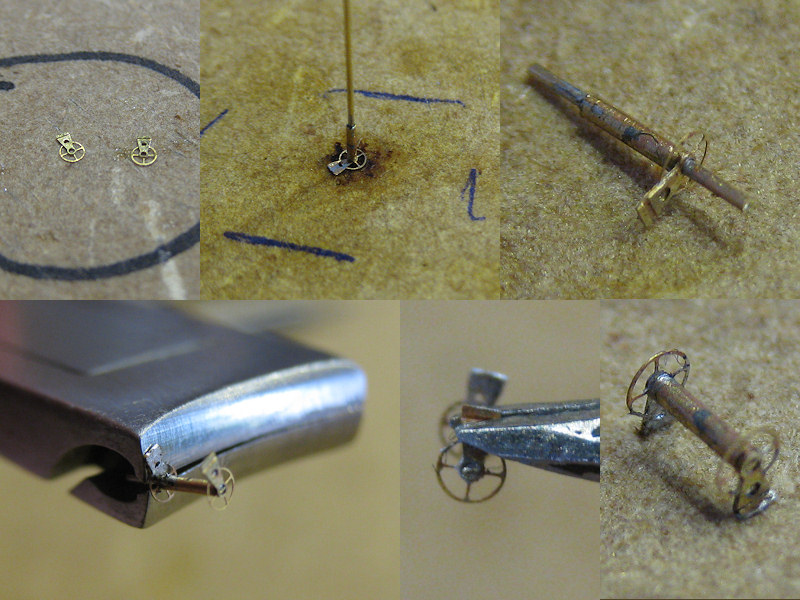 The two etched parts are cut from the fret, sanded and put in the “storage area outline”; they are so small and difficult to find that putting them on the same spot actually helps. Now, I drilled in a small 0.3mm hole on the base plate so that I can plug the 0.3 wire through the etched part (top center), add some flux and then heat while gently pushing the tube down with fine-tipped tweezers. The part is both held in place and aligned at the same time. It can help to use to Optivisor to see if the solder is really flowing; if the connection is bad the part will probably fall off anyway. The long end of the wire is clipped and the other etched part is added. This is more difficult as they need to be aligned with respect to each other and there is some risk of the first part getting loose, so some trial and error is required.
My cheap model pliers weren’t any good for clipping wire (most modeling tools aren’t) but my beautiful Zwilling toenail clippers were just perfect for the job. Afterwards the excess wire (nearly nothing) was filed off; this is a tricky part as it’s very easy to catapult the part if you’re not careful (need better tweezers). Afterwards the etched parts were folded. Here the optivisor came in really handy, showing me if I held the tweezers properly over the fold line. The image bottom left shows a poor example, risking folding over a hole present in the part. Bottom right shows a finished cordage reel; 2.5mm wide.
The hawser reels presented a much greater challenge; I needed to make drums with a 0.3mm hole for the center wire to align all parts. However, I haven’t been successful drilling in these small holes in brass. I started with a center drill of 0.5mm, giving only a gently tap to the end of the rod, but the small drill often wandered anyway. Even when the hole was centered perfectly the drill breaks, even when I drill very carefully using cutting oil and cleaning the drill every few tenths of a millimeter. Anyway, I gave up and ordered some stock tubing from Albion Alloys with a 0.3/0.5 inner/outer diameter. Drilling in a 0.5mm hole is very much easier and the tubes are very easy to cut to length 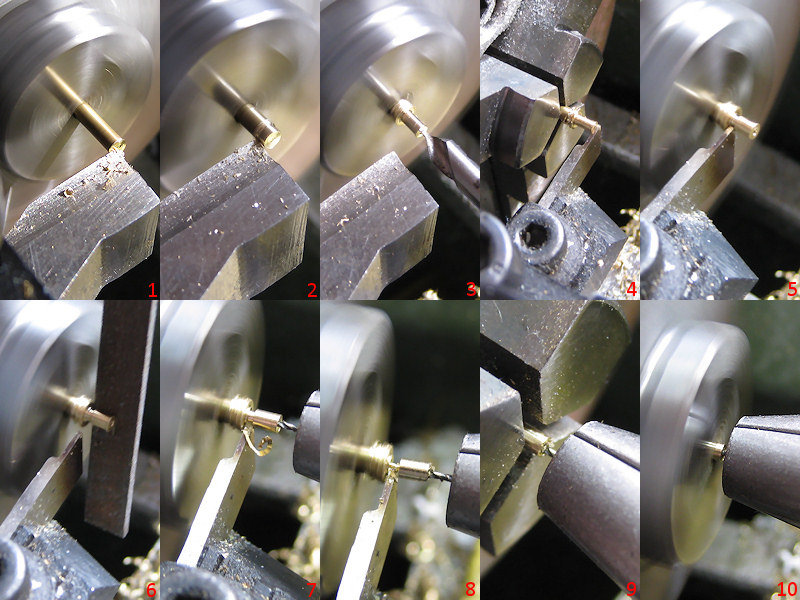 Making small brass tubes is now fairly easy for me. Setting the late at its highest rpm (only 3,000) I start with cutting the end of the stock brass (1) and cutting the rod to the correct diameter in very small steps (2). I bought some stock rod from Albion at the right diameter but I lost it… Next I position the 0.5mm hole with the center drill but I do not drill the hole yet (3). I change the cutting tool for the parting tool (the quick change tool holder is the best upgrade for the lathe). I position the parting tool, release the rod,push the rod back with the parting tool and fix the rod again in the chuck. This is my primitive way to reposition the parting tool at zero (4) and make a small groove with the parting tool (5). Then I apply the square flat file; I put the lathe in reverse so that  the file isn’t catapulted into my eye when I accidentally hit the chuck with the end. I think this is much safer (6). I continue slowly with the parting tool (7) and capture the small tube on the end of the drill (or center drill). I usually make a batch of them before reinserting them in the chuck (9), apply some cutting oil and drill them through. 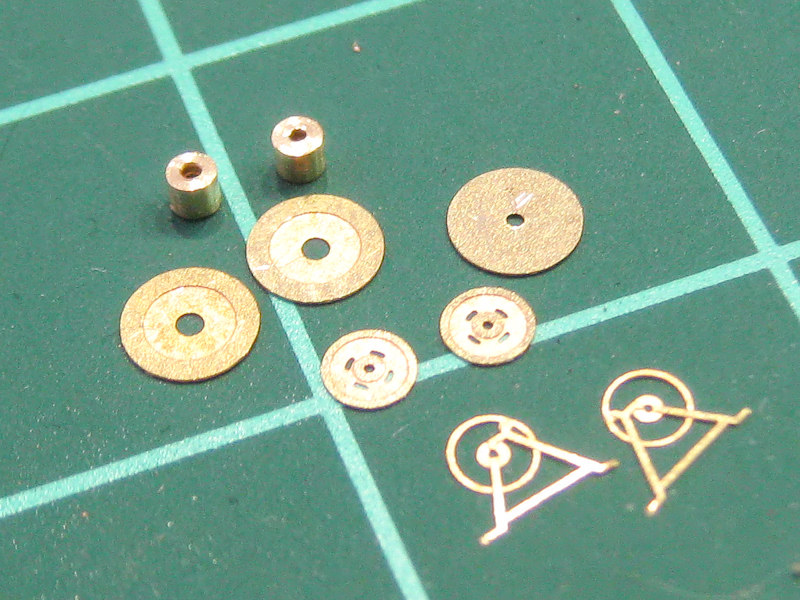 I took a few images of the largest hawser reel, consisting of 2 tubes and 7 etched parts. 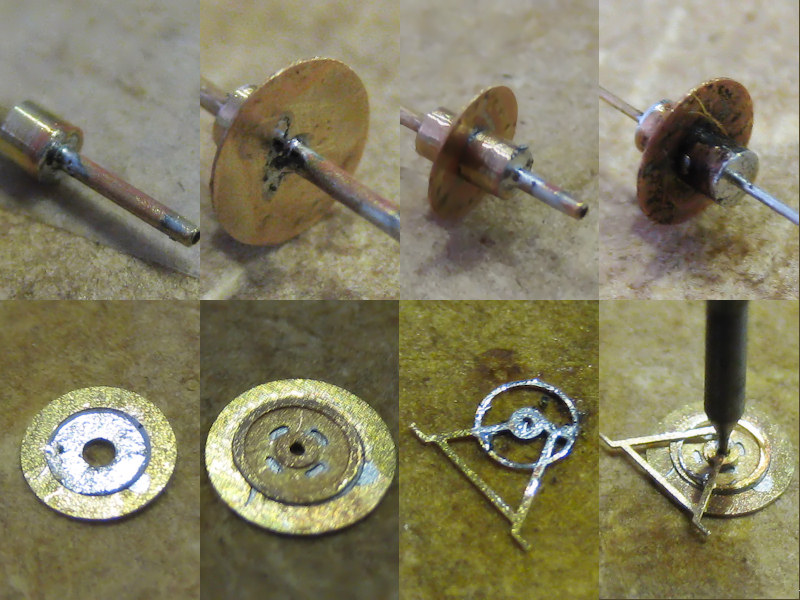 The top four images show the small drums added to the 0.5mm tube. The tube is much to long but when the to tubes are soldered to each, I insert the part in my hand-held drill and cut the tube by hand. A small 0.3mm wire is then put through the tube. The etched parts at the side are actually three parts, so that I could capture a bit more detail. The first parts fit into each other and need to aligning, but the last part is held in placed by an old broken-off 0.3mm drill. 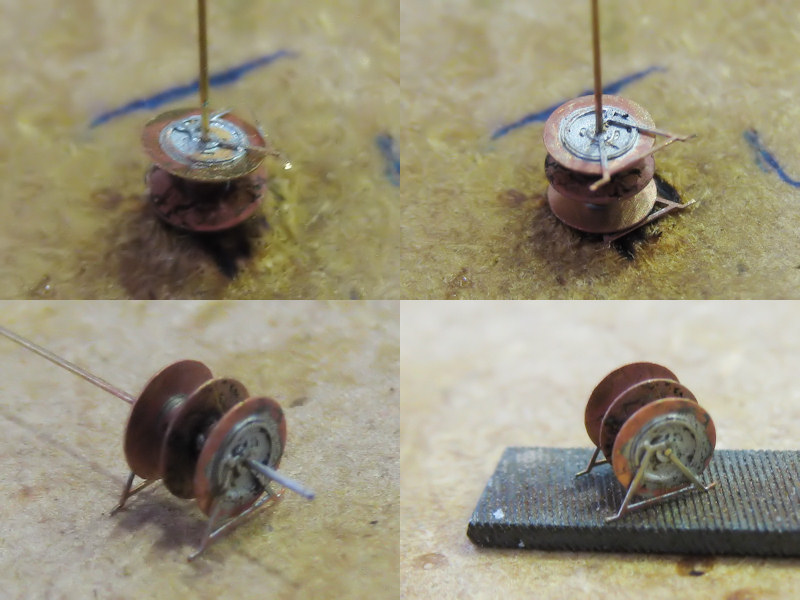 Like the cordage reel,. the hawsers are fixed to the bade plate and the parts are all soldered into place. This is a tricky part because all the parts get desoldered; I apply pressure with fine-tipped tweezers while the solder solidifies. The part is checked to see if everything still aligns nicely and of all the feel touch the deck properly; if not, the part is heated and realigned. The 0.3mm is then trimmed and filed smooth. 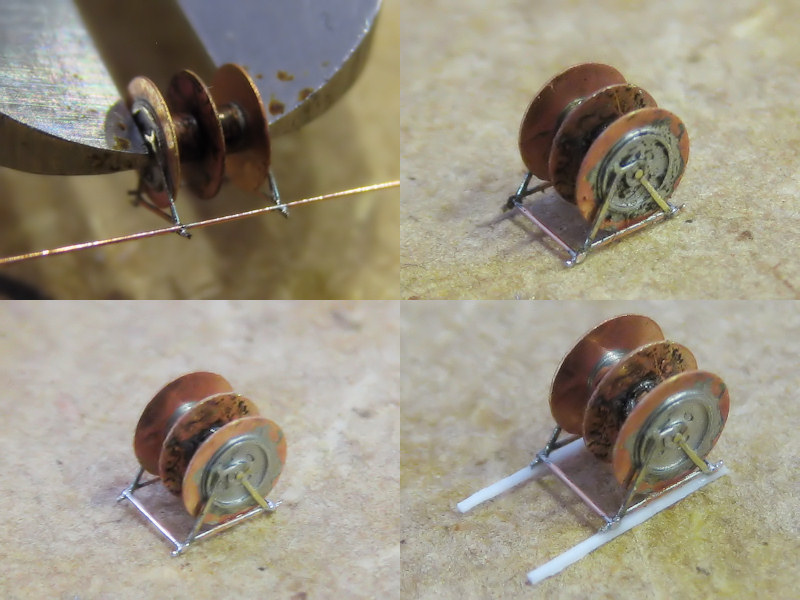 The small model is clamped into the caliper and a 0.15mm brass wire is soldered into place, cut to size and filed. If the rod breaks off during filing, then the bond wasn’t any good. Although the flux is sold as no-clean flux, I threw the parts int he ultrasonic cleaner anyway. This cleaned up the parts and improved the bond between the final two parts superglued to base of the small models. 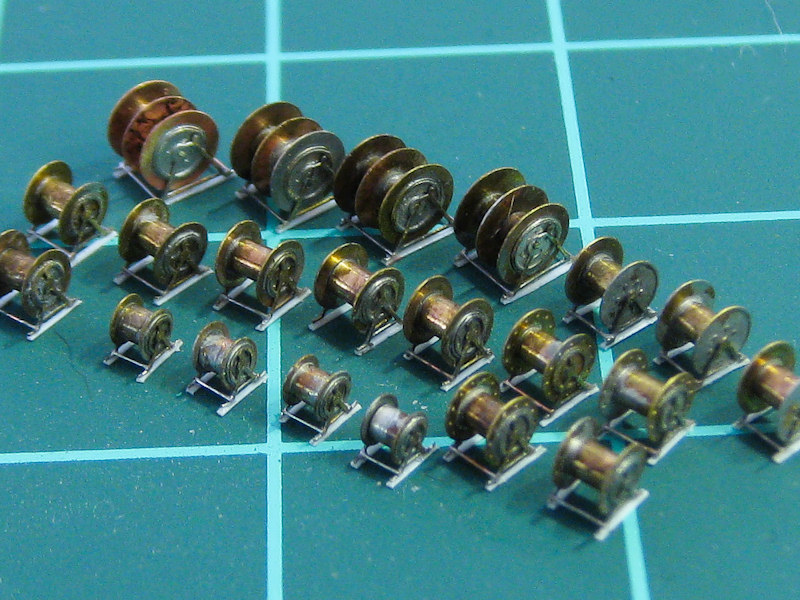 Not the best picture, bit it givens a nice impression of the range of reels to be fitted to the model. Why doesn’t the reel at the center doesn’t have those two wires? Must be a failure I didn’t throw out.