HMS Hood carried a typical tripod main mast, with the topmast fastened with stays from the star fish. Several modifications were performed on the mast, including the addition of a radar set of which no drawing exist how this was actually done. The main mast is constructed from styrene and the top mast is a brass mast from modellmarine, made by Burkhardt Masch. I choose a mast with the correct lower diameter and taper, cut to length later. 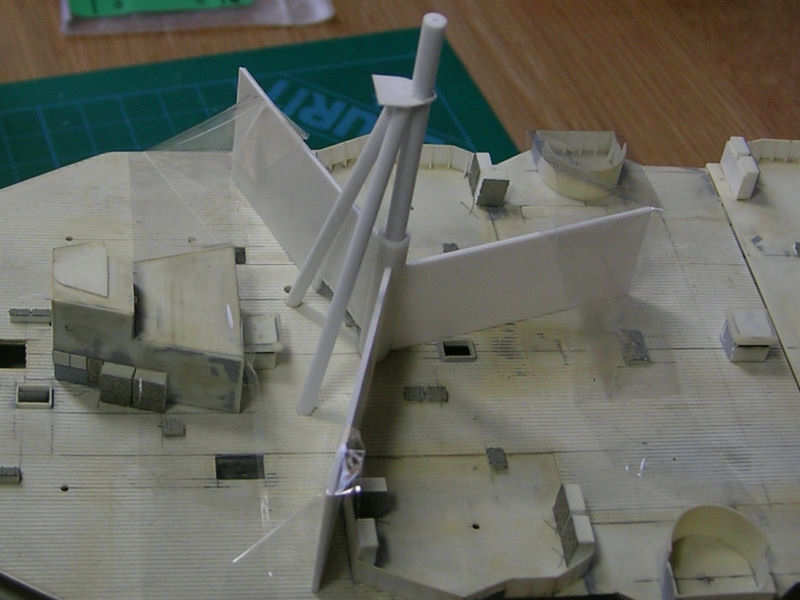 Here you can see the tripod under construction. I choose to do this ‘in situ’, in order to have the tripod legs fit in their emplacements in the deck part and simultaneously have the mast completely up right. A small mould (tube) was used to keep the mast up. The small platform was cut at least 15 times before I had one with the right shape, with the small strip around the main mast of a constant thickness. That strip broke often all the time during drilling. 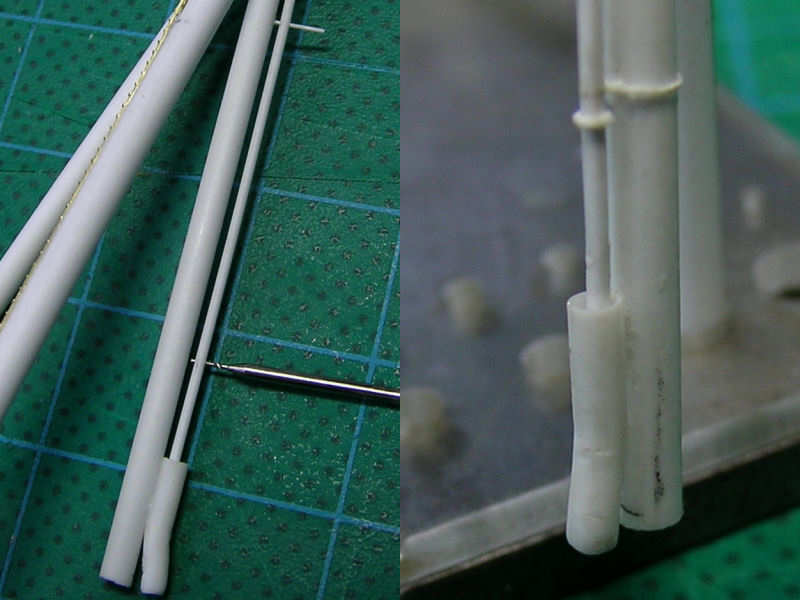 is a diesel exhaust pipe connected to the port side tripod leg. This exhaust is fitted to the tripod at three points. I first drilled in the exhaust pipe at the correct locations, taken from the best photograph I have to the mast taken f om the bridge, and then drilled-in in the tripod through the exhaust pipe. Next, I made several rings simulating the flanges keeping the individual exhaust pipes together. Of course, you can use rods and disks, but a single rod and rings is structurally more sound, especially with a few drilled-in holes. After the pipe was glued to the tripod mast, the rings were glued into place. A protective cover is fitted to the base of the exhaust pipe. My guess is that this cover is fitted in order to avoid damage when handling the admirals barge that is stowed very close to this location. 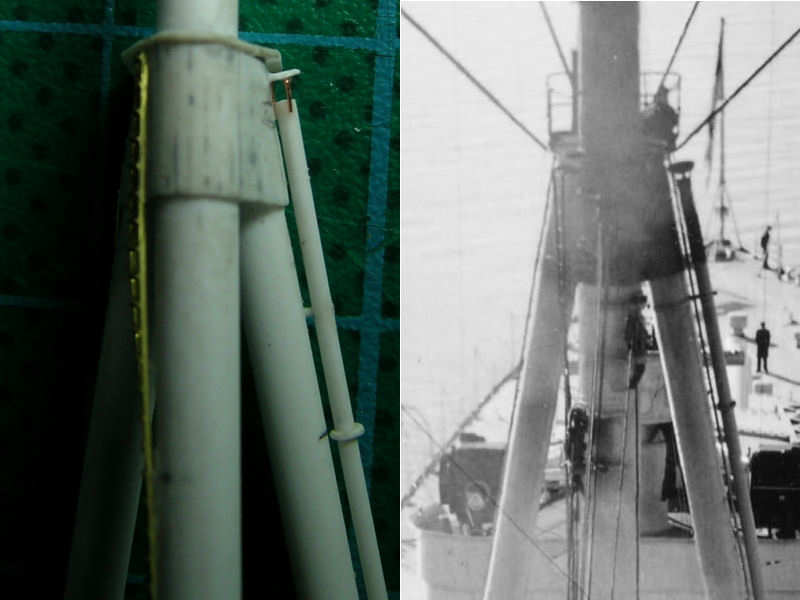 Each tripod leg is fitted with a ladder. I choose to use ladders by Aber, which I considered the best ladders available. They need to be folded, which is very tricky for longs lengths of ladder, but they can be directly glued to a bulkhead without additional supports and drilling in that usually spoils the fine feel of the etched part. Note the odd curve in the ladder as it approached the lower platfrom below the main starfish. I also added a cover to the diesel exhaust pipe, estimated dimensions from the photograph at right. 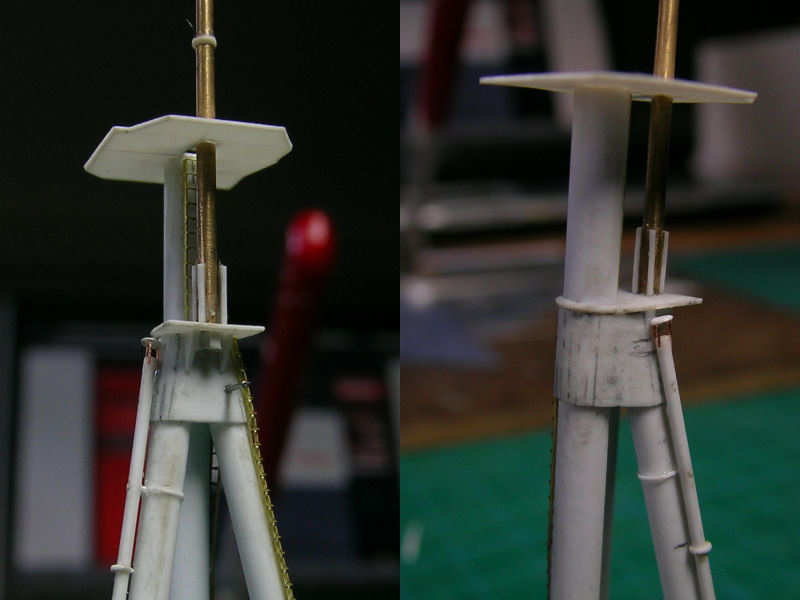 A nice detail shot of the main mast below the yet-to-be-fitted star fish. A small ladder runs from the upper platform the star fish. The main topmast housing is fitted to the bottom of the topmast. There are several nice drawings, but none to scale. This part will require more detail. A small metal tube is seen sticking out of the rear of the mast where the tripod legs meet. I have no idea what it is and it isn’t on any of the drawings, except vaguely on a few photographs. 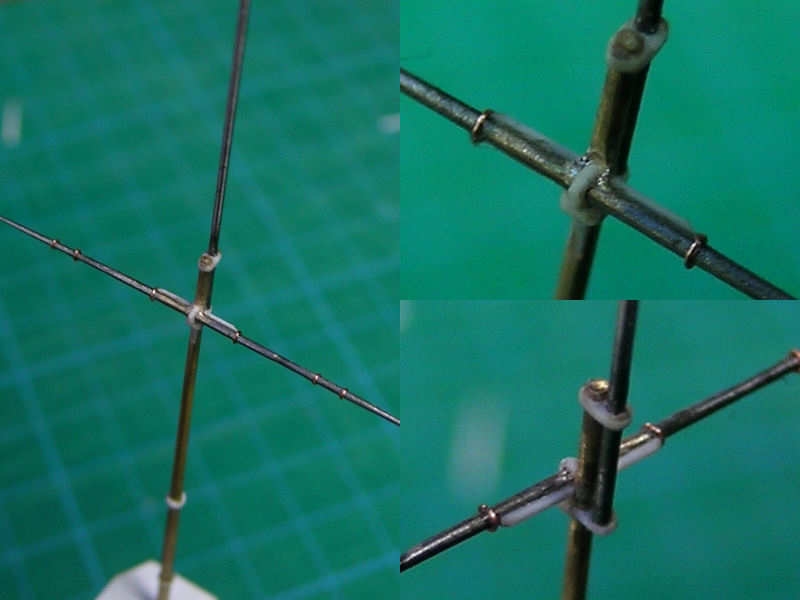 A nice close-up of the topmast and wireless yard. Drawings of this yard are much better in Anatomy of the Ship: Warspite, by Ross Watton, including how the yard was fastened to the topmast. I like this detail, I haven’t seen it before on 1:350 models. The yard arm was hard-soldered to the topmast. Normal soldering resulted in a very weak bond and I didn’t like the prospect of gluing. With these scratchbuilding projects, the chances of handling damage are must greater than with kits, so I wanted a strong bond. I bought a Proxxon torch and started practicing hard-soldering. This is really tricky to do and more often than not I completely vaporized the brass parts. This is why the topmast and flagpole are made from steel. But even then, the solder wouldn’t flow between the two parts no matter how careful I was with adding flux and aiming the torch. I spent hours soldering wire together and in the end I just decided to stop playing around. Fortunately, the parts were soldered correctly in one attempt, with only some minor deformation in the topmast which was easy to remove. I added very small brass rings to the yard to simulate some much-needed detail. The flagpole is connected some distance from the topmast. To my surprise, the strength of the model is sufficient. Even more to my surprise, that flagpole was later removed to add the Type 279M radar antenna, which is a standard Royal Navy part. So, I snapped it off!