Nearly all resources of HMS Hood show the layout of the bridge equipment in the open air, though only as location placeholders. One good image is known of Hood’s Air Defence Position (ADP) showing a series of pedestals and smaller sights and range finders. Finding out which one goes where and what piece of equipment it is was the next challenge. In the end, it appears that HMS Hood is fitted with the same equipment fitted to all battleships, most heavy cruisers and fleet carriers. However, getting a good picture of that equipment is something different altogether as these smaller sights are usually placed in crammed positions that are visually obscured. 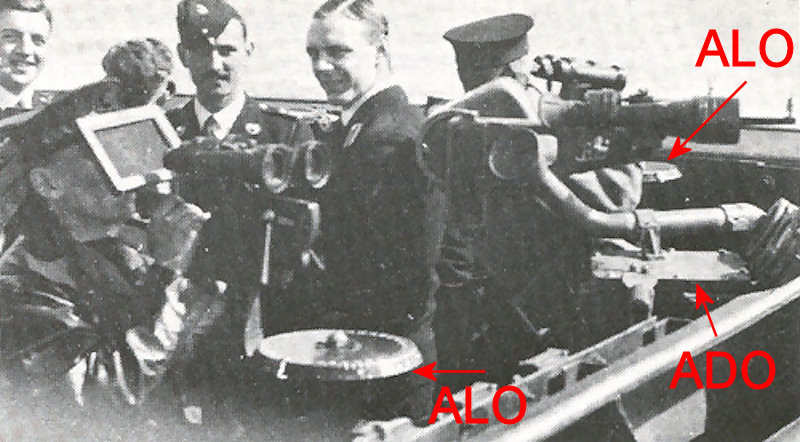 Here is a unique image of the ADP of HMS Hood. Some equipment is visible and was an unknown to me before starting doing some research. If you want to learn more about how and why the bridge of a British warship was equipped, I suggest reading The British High Angle Control System (HACS) by Tony Tony DiGiulian at the navweps website or the High Angle Firing chapter in the Gunnery Pocket Book at the Historical Naval Ships Association.

The ADP has a control team consisted of the Air Defense Officer (ADO) and his assistant. He has a special ADO sight that can indicate the to-be-engaged aircraft by relaying a target bearing. Such an ADO sight is thus an aircraft bearing indicator but this sight also functions as a star shell sight at night. The other ADO sight is manned by his assistant, so two of these sights are present. There are six so-called Air-Lookouts (ALOs), three on each side of the ship’s bridge. Each ALO continuously observes an arc of the sky around the ship, watching for aircraft to appear. The ALO uses a position with a pair of binoculars. Once an aircraft is spotted and marked by the ADO, the High-Angle Control System (HACS) will determine the target’s speed and bearing so that it can be engaged by the heavy anti-aircraft artillery. Each large capital ship was typically fitted with three or four of such HACS directors. The model of the HACS is described here. Next to the HACS directors, a series of close-range pompom directors are fitted. HMS Hood was fitted with one such director for each pom pom gun, one Mark I and two mark IIs ). The pom pom and HACS directors in the Royal Navy were all fitted with the Yagi radar aerials later, but HMS Hood was sunk before those radars were fitted. One piece of equipment present on other ships that probably would have been fitted to HMS Hood was the Auto-Barrage Unit (ABU) that determined the range of the enemy aircraft, in order for all anti-air guns to fire a single barrage.

The captain himself also has a bearing indicator that was placed on HMS Hood, but not on the inside of the bridge probably due to space constrains. On the King George V class, these sights were placed inside. A final sight, according to John Roberts, is a UP sight placed near the upper ADP of HMS Hood. No information was found on this particular sight.

So, the typical equipment found on RN warships is one pair of captain sights, a pair of ADO sights, two pair of searchlight sights (depending on the number of searchlights), three pairs of ALO sights, a pompom director per gun and a number HACS directors. The latter is the only one that is clearly visible on warships. 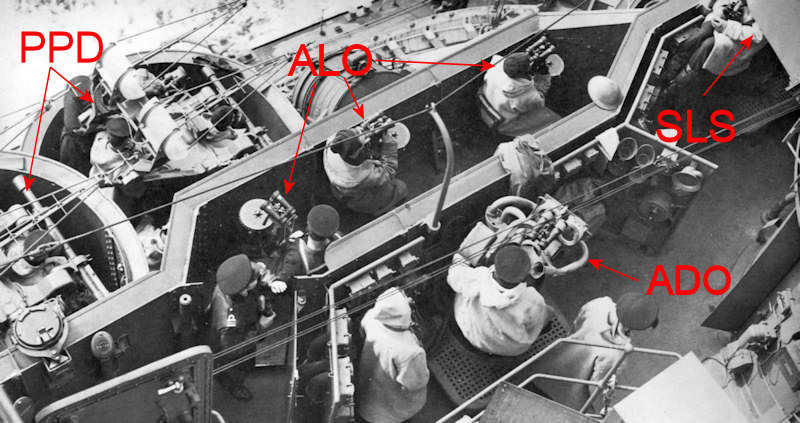 This image of HMS Prince of Wales’ bridge shows the ADP most clearly. From this picture follows that the sight on HMS Hood’s ADP is the same. The three ALOs are seen clustered together with the pom pom directors fitted a level lower. The searchlight sight (SLS) is just out of view. 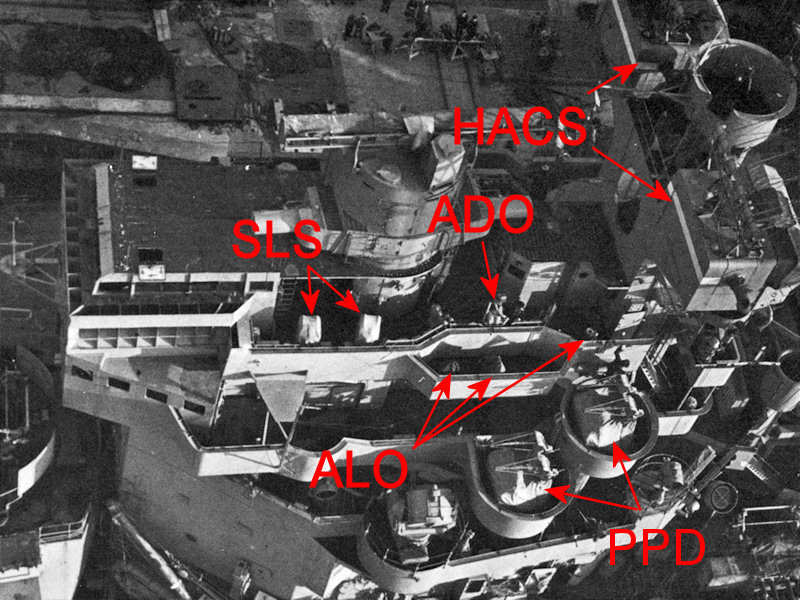 A clear top view of the bridge of HMS Duke of York. The three ALOs are well visible. HMS Prince of Wales and HMS King George V have their ALOs clustered together in a single position, but one of the ALOs aboard HMS Duke of York appears to be placed a but further aft. The searchlight sights (SLS) are seen at left below the main fire control director and are wrapped in covers, as are the pom pom directors (PPD). The captains sight is inside the fore bridge and is not visible. 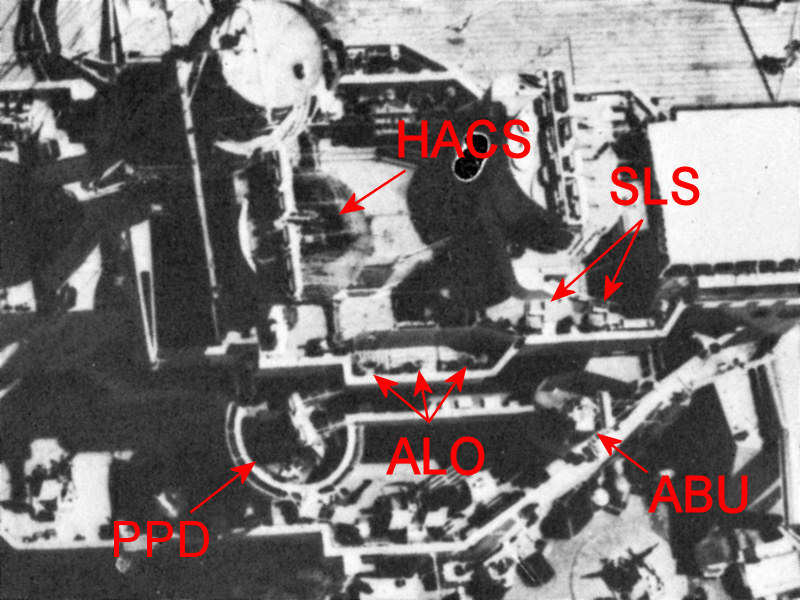 An excellent top view of HMS Queen Elizabeth, clearly showing the six ALO positions and searchlight sights (SLS). The ADO is not visible, but might be located in the fore bridge, as with HMS Warspite (slightly different bridge layout). The ABU is visible bottom right. 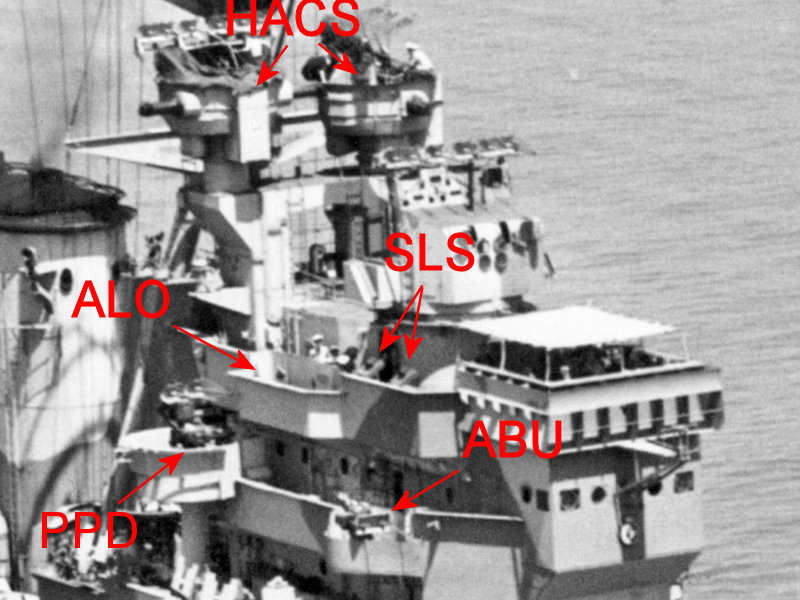 This schematic of the bridge of HMS Victorious shows the same equipment as on the battleships. Even with everything clearly in the open, I haven’t been able to find a good picture of the bridge of a carrier. 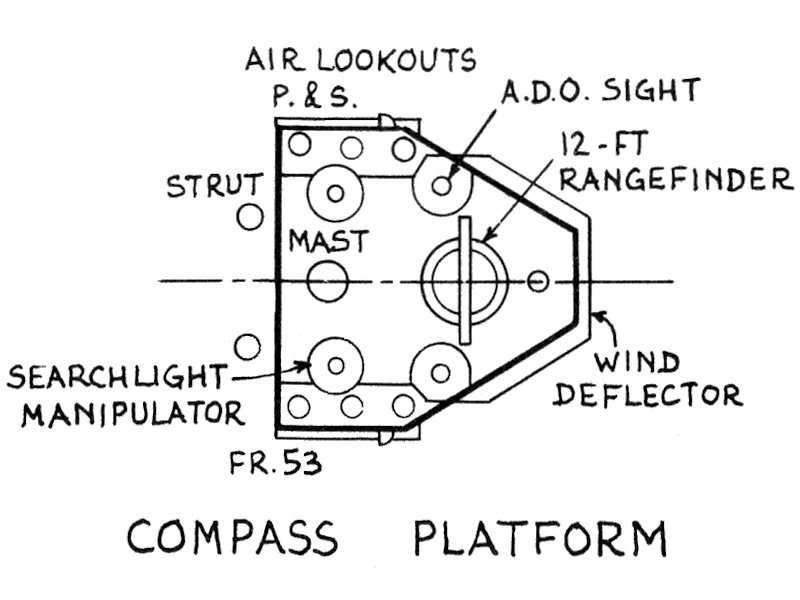 Now that I know what to look for, this equipment is visible on most other larger ships and even on monitors such as the layout above indicates, but the information on bridge equipment of most of these images is poor. If you flip through Raven and Roberts Battleships and Cruisers volumes, you’ll notice many (unannotated) positions of the ADP equipment corresponding to the number of directors I now expect on board these vessels. 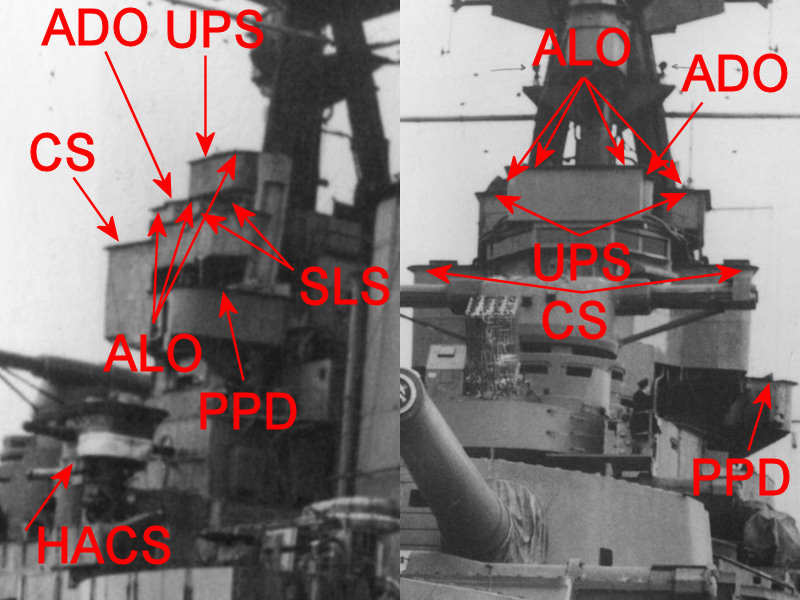 So, here’s a clear image of HMS Hood showing the location the Captain’s Sight (CS) and UP sight (UPS) as well. This clear image indicates that it is impossible to see any of the items on photographs as described above and the first image in this post of the ADP is the best there is as far as HMS Hood is concerned.

Part II of this post will show the individual units in detail.