One of the reasons this blog wasn’t updated for a quarter of a year was due to the trouble I had with assembling the cordage and hawser reels. I’ve split up the posts into two parts: standing and hanging reels. The latter are the thinner reels that are scattered around HMS Hood hanging from a bulkhead (about fifteen) plus the four smaller reels near the davits of the 27″ whalers. Here I’ll show the standing hawser and cordage reels, otherwise known as the opening scene of “how I started worrying and learned to hate my model”.

One of the things that will immediately become apparent when you start looking for photographs is that the reels are nearly always covered in canvas (just as the ships boats). Although I want to have the most accurate model I can build, I already decided to slightly cheat on those covers so that all detail would be there to admire. Using the images that I had, I started with a head count. This is quite difficult, as you need to determine the height of each reel correctly before you can decide what type it is, or perhaps you find out it is a type you missed? I certainly wouldn’t recommend estimating the type by eye, I really needed a ruler the estimate the dimensions in relation to items in each photograph.

I’ve identified five types. The first type is the large hawser reel (L) that is specified in the Anatomy of the Ship series volume (but not entirely to my liking). I found one behind the forward breakwater, two on either side of the aft searchlight platform, and one next to the bridge (see below). 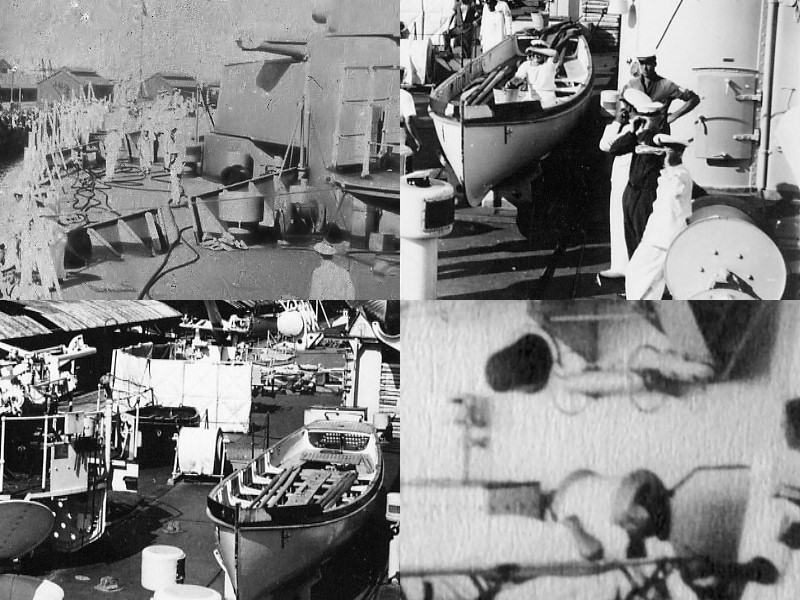 Other types are seen here. The top right one is a cordage reel that remained on board HMS Hood, but I cannot find more that one, at the starboard side of the forward funnel. The bottom-left is a hawser reel that is similar to the largest hawser reel but smaller, about the height of the railing (hence medium). I found six so far: one behind the forward breakwater, two behind B-barbette, two in front of the main stairs on the boat deck (between and outboard of the funnels), one near the main mast. I also had a look at the image top left and decided this cordage had a few weight-saving holes. This is not uncommon so I made a variant on the medium hawser reel. I now think it’s just a normal cordage as the one top right and the image is too poor to make out its correct configuration. Still, these variants were added anyway. We know that many cordage reels were replaced by hawser reels so this one will be a hawser reel too. The last type is a hawser reel shown bottom left that is basically too small to be a medium hawser reel (so: small). There are four: two are fitted below the paravanes stored on either side of the bridge (lots of smaller reels are fitted there as well), and two were found at the far end of the boat deck, both at port side. 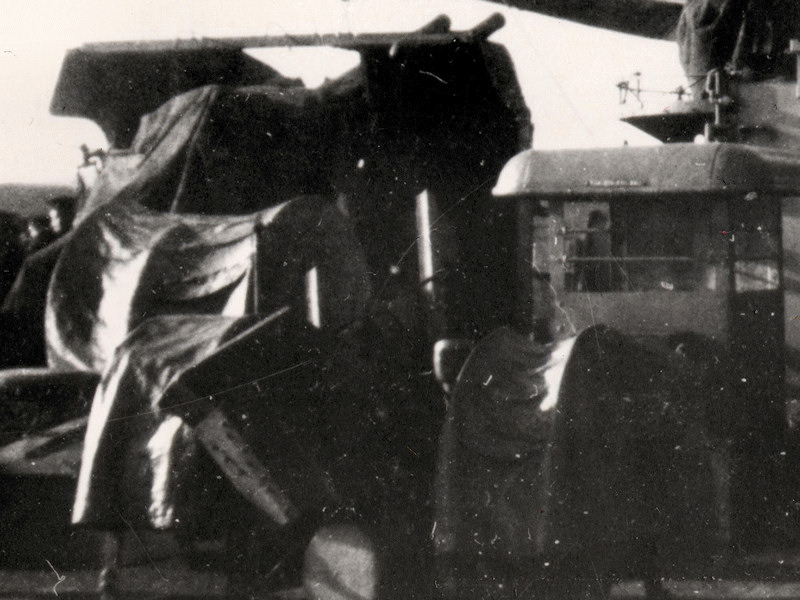 This image shows two small and one large reels at the far end of the boat deck. The right vent and 4″ mount serves as a reference for identifying them. 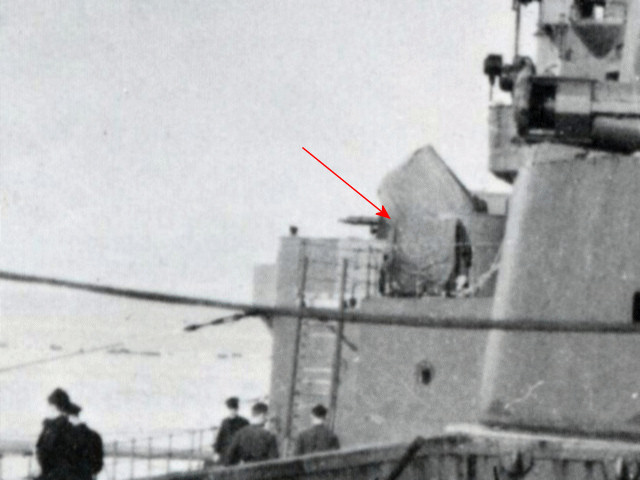 This image shows a nice surprise: there is a large hawser reel (taller than the railing) fitted near the bridge. There are no other images of this reel, so it’s quite difficult to make out its position. 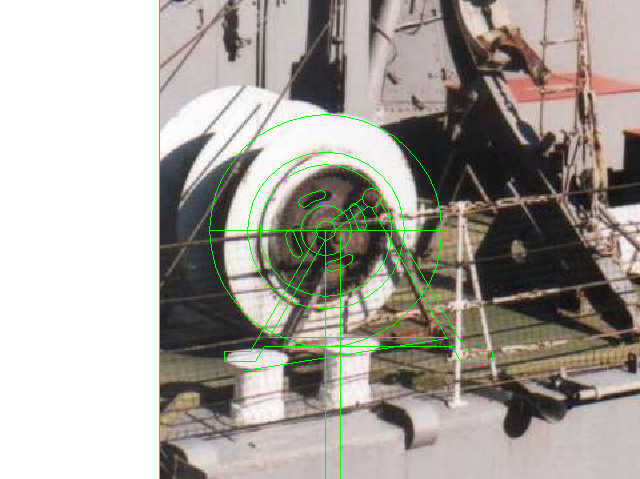 The dimensions were obtained from careful observation, but the pattern followed from tracing existing reels from museum ships. This image was taken of HMS Haida, taken from Resin Shipyards, with permission. The design matches the drawing in Anatomy of the Ship and required dimensions nicely.

The other reels were drawn using what material I had. In order not too have too few details on these parts—can’t have that—I decided that each side of the reel should consist of three parts, as shown here. There are a few design choices I made that seemed like a wonderful idea but turned out to be quite to opposite. The center part would first be glued to the large part, by applying glue from behind. The combined parts would then be centered on a small drill and the last part would be added, nicely centered. I started with the largest reels, thinking them easiest to construct but they were the hardest to do by far. Notice that the center etch part has a small circle that fits nicely on the part at right? These need to be aligned. This was the first major error: it is so very difficult to apply glue while keeping the parts aligned. I’ll make sure to avoid breaking rotational symmetry of the parts when I can help it.

But this was only the beginning of my troubles. The parts are etched in steel—not brass—that material is very difficult to glue. All parts kept falling apart and proved to be very difficult to glue back without overdoing the glue or damaging the parts. I had to try out all different types of glue before deciding on one glue that worked quite well: a good bond, not too thick, not too expensive and easy to apply. I now use ordinary Pattex. I trashed all my other super glues and I won’t be buying these miracle glues on modeling shows as they clearly suck (no, the glues!). The Pattex won’t last very long when opened, so I bought many bottles. I also learned that flat PE parts squeeze most glue to the edges, so very little glue is actually between the parts. Removing excess glue usually results in not having any glue at all. Next time I’ll etch some ridges to keep the glue where it is supposed to go.

After having solved the 2010 glue crisis, I made the drums. Simple rod with a 0.3mm hole in the center. I used thin brass wire, set my lathe to the slowest setting, and applied a bit of glue. Turn on the lathe, and see how wonderful the wire will wind itself into impossible shapes and how the glue will get everywhere and forcing you to start all over. Again! Needless to say, I had a lot of failed parts. The next problem presented itself when you find out that you need to trim the drums to length so that the edges are perpendicular to the center line; otherwise these nice etched parts will be skewed and all effort was for nothing. Of course, when the bond of previously-etched parts wasn’t as good as you hoped for, the entire part could come loose at the last minute anyway. So, at the end of the construction phase, a small round of non-destructive testing was introduced to sift the strong from the weak parts. Those who could be saved went to the depressingly small pile of finished parts. 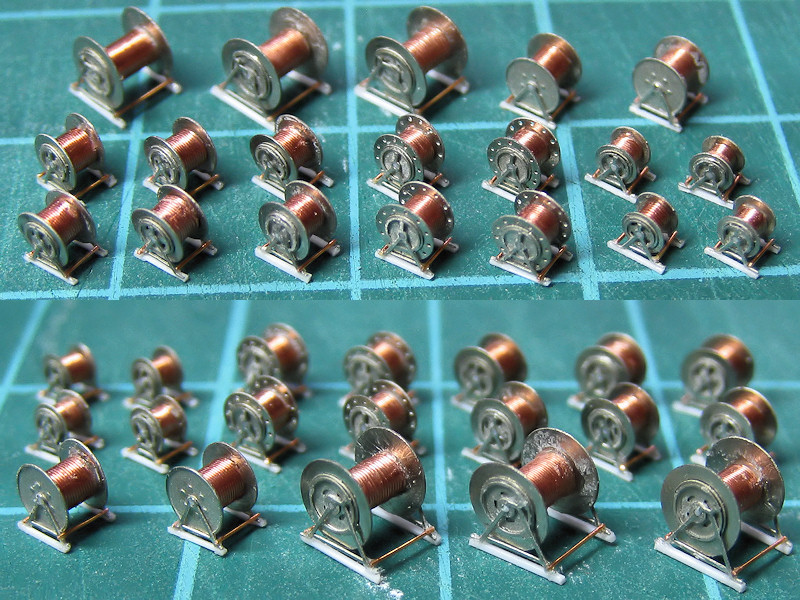 Here they are. Nineteen small models (short of one large reel). You’ll notice that the etch set, which I had made three times, has enough parts to make ninety (link). I thought I had enough parts to make lots and lots of parts and worry about how many I needed later. “I can always choose the ones that worked out best”. Unfortunately, I hardly have spare parts left! I have one spare cordage and four medium cordage reels that are probably wrong anyway. Still, I really like the those small holes and I think I’ll scatted them around the forward gun turrets.

So, on to the really small hawser reels. The good news is: only two etched part per reel and not six.