I started these Carley floats about a year earlier while we were in the middle of rebuilding our house leaving little space for any modeling (the model was stored). The floats didn’t require the model to be at hand for fitting and I wanted to do something. So, some time for minor parts. Ahston et al. (1993) published a thorough investigation on the loss of the HMAS Sydney and a related Carley float; one float was apparently the only remnant for HMAS Sydney, a cruiser lost with all hands after a battle with the German auxiliary cruiser, HSK Kormoran, in November 1941. This report contains a bit of particularly useful information. 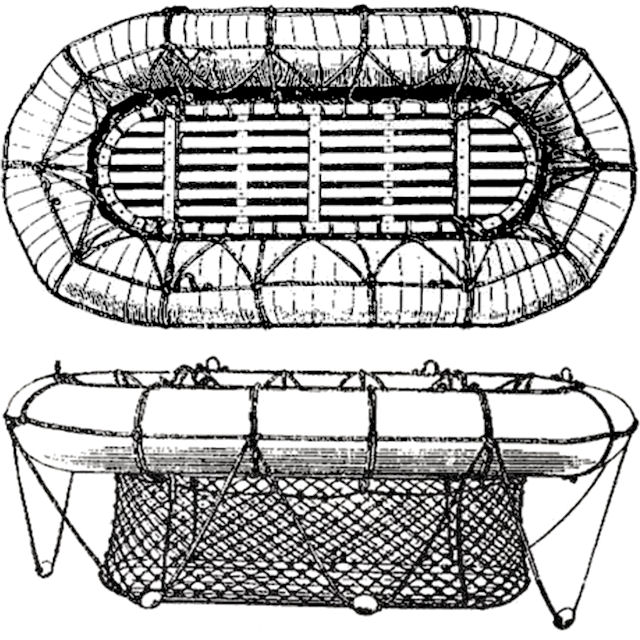 The Carley float is a simple combination of copper tubes with a cork, cotton, and canvas covering. A wooden grating that could be lowered in the water was fastened with rope where you could ‘stand’.  The even less fortunate were expected to cling on to the ropes around the float making  it not much more than a large life ring for groups. I can image you can only survive with such a float for a few days when the weather is favorable. Note the characteristic way in which the rope is wound around the tubing, showing rope going around the entire float and around the circular section, but also rope at an angle at the inside. I wanted to capture this specific detail. Before starting, I had to know which types of float were carried by HMS Hood as the exact dimensions of the floats weren’t written down anywhere I looked.  Ahston et al. give a table of the types of rafts available at the time:

It is noted that each float was fitted with two paddles (four for No. 18), a boat hook and a painter (?); No 16 to 19 had two ladders. This is information as precise as one could wish. 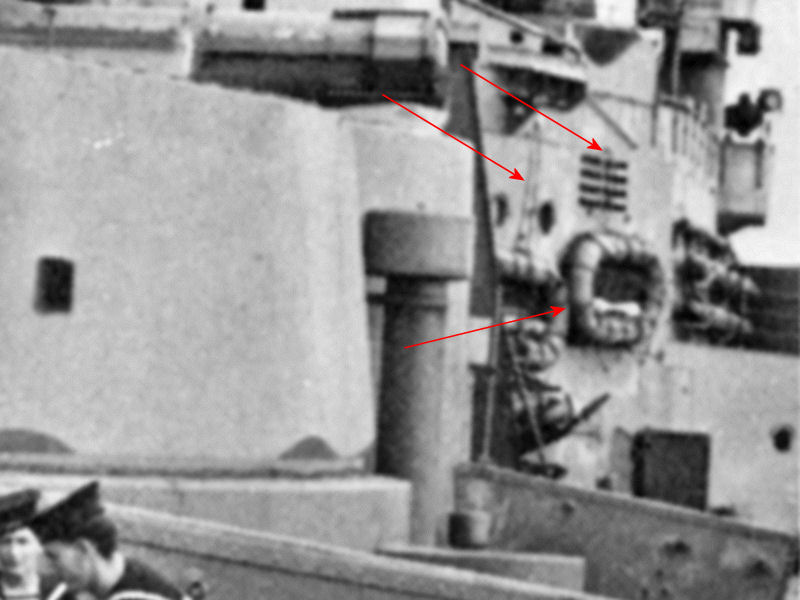 This image shows two Carley floats hanging from a few ropes to the bridge bulkhead and, based on its relation with the bridge structure it’s suspended from,  I’m quite certain it has to be 5 feet wide based. Note that the ropes differ from the pattern usually observed: there should be some rope at the center of the float but it’s not. I haven’t seen a single image of a float with the pattern as seen here so I guess the crew repatterned the float? This detail was omitted from the raft models though. 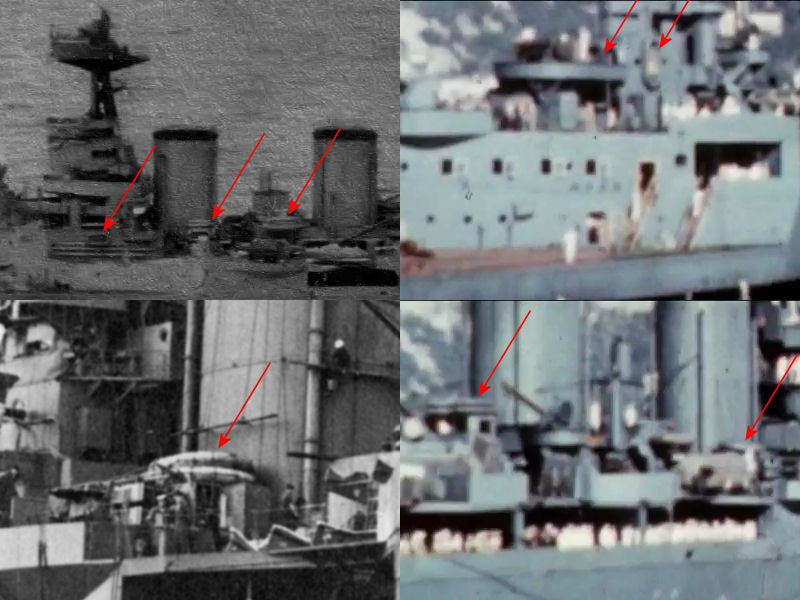 I found out that the closest matches are Nos 19, 20, and 17. The Nos 19 are fitted against the bridge superstructure and on the disinfector house, No 20 is on the superstructure between the funnels and fitted to a side bulkhead of the aft searchlight platform and No 17 is mounted against the aft bulkhead of the searchlight platform. The position and number of floats aboard HMS Hood seems to differ greatly over the years, but I think this is fair assessment of what float goes where for April 1941. Note that the floats to the port side of the forward funnel appear to be lying on some structure. Instead of worrying about the type of Carley float, the real question is: what is this structure? More about this later below. The model floats themselves were made from styrene rod. You first need to bend the rod into shape. I played with boiling them, putting the parts in the oven and I eventually used a cigarette lighter on rod curved around the end of a drill with the right diameter. You only need to heat the part for a fraction of a second or it will melt or start to burn. Each float consists of two halves that do not have a tendency to bend back. Next, I used the drill press to make a drilling jig. At left you can see the outlines with a few 0,3mm drills. I glued thick styrene strip against these drills, let it dry, put in the floats and drilled away. I used the cross table of the drill press for a reproducible pattern. The result is a series of drilled-in rings, here for the 5×10 models. 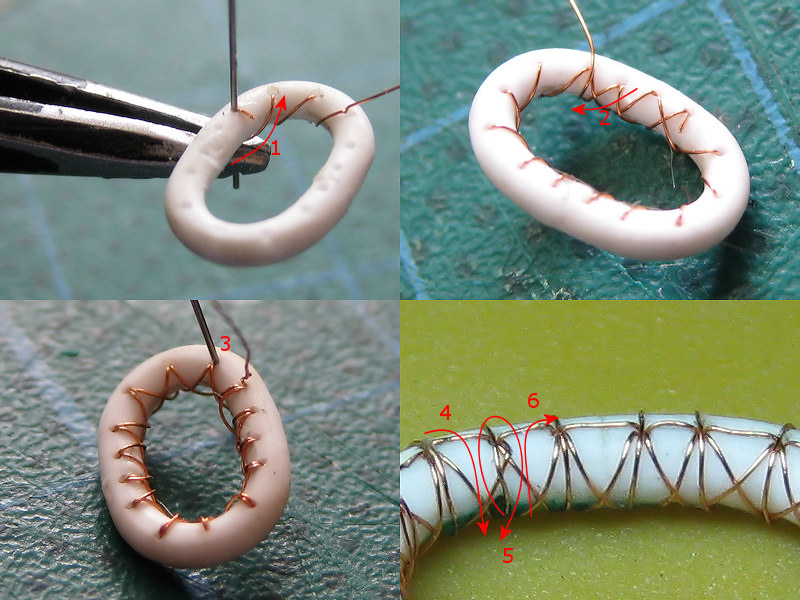 The rope pattern can be simulated with brass wire. Gluing small pieces along the raft gives a lot of glue spots and doesn’t really look very good. So,  thought it would be nice to sow the ropes with 0.8mm brass wire. The real Carley floats aren’t very neat, so making this rope pattern by hand gives with the same variation. Here’s an example of the largest float so that you can actually see how these floats were rigged. I started with gluing the end of the wire to the inside to the float, out of sight and not clogging up one of the holes (1).  I then went around the float, zigzagging from point to point. The procedure is reversed and the cross pattern in the ropes appears (2). You constantly have to correct the wire with a pair of tweezers or push the wire through the hole with small drill to get the best result (3).  Simply pulling the wire taut every few runs doesn’t give a good result. Sometimes the wire breaks, but repairs are easy to do.

After the cross pattern was made I continued with the other ropes. I jumped from one hole to the next over the top surface of the float and put the wire through the hole (4). I went round the float once (5) and before pulling it taut,  I ran the wire back through the hole, ending where I started (6).  The wire around the float lies on top of the wires going from hole to hole, kept neatly in place.  In the end, a single wire produces the entire pattern and runs 4 times through each of the 0.3mm holes.  About 15cm/6in of brass wire is needed for the smallest float. Glue is added afterwards, at positions that are mostly out of sight. Even though this was fun to do, I wouldn’t recommend making all the floats by hand for a project where you need fifty floats. Next time I’ll cast a few for easy reproduction. 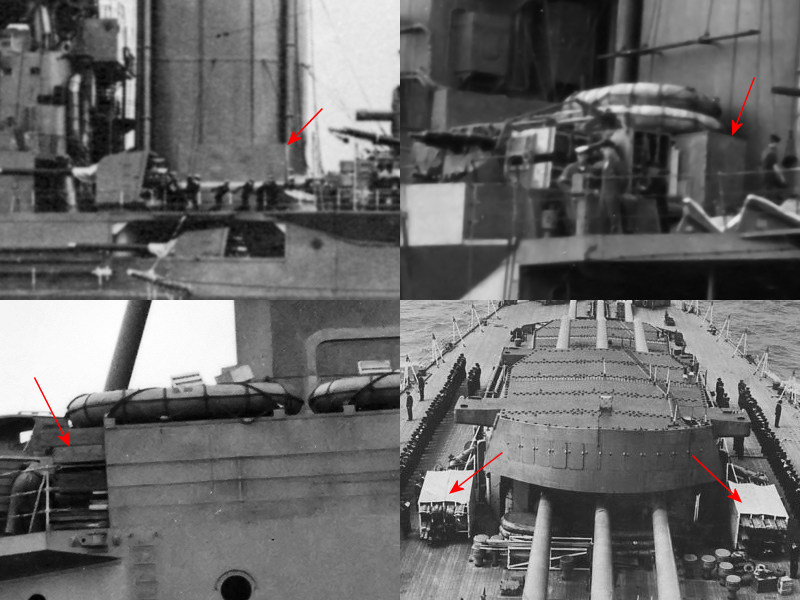 Now for that mystery block near the funnel. In the top left image you can see it hiding in plain sight and you really have to look closely or you won’t notice it is there at all. Top right shows the floats stacked on “it’. It appears to be fully closed. So, with no more to go on, what could it be? Other ships have similar blocks. For instance,  there are two of them on the boat deck on the King George V class battleships, shown bottom left (plus Carleys on top of it). Notice there’s a lot of planks and beams sticking out. Now, HMS Hood also carried a lot of planks and beams next to the funnels, deposited loosely and without any structure, so it might just be a neater and safer way for storage. On either side of the turrets of HMS Rodney (bottom right) you can find similar racks. These are shorted and appear to be oars storage racks? I cannot tell for sure for HMS Hood. I decided to add a randomly detailed rack to HMS Hood, based on the dimensions in the above images. 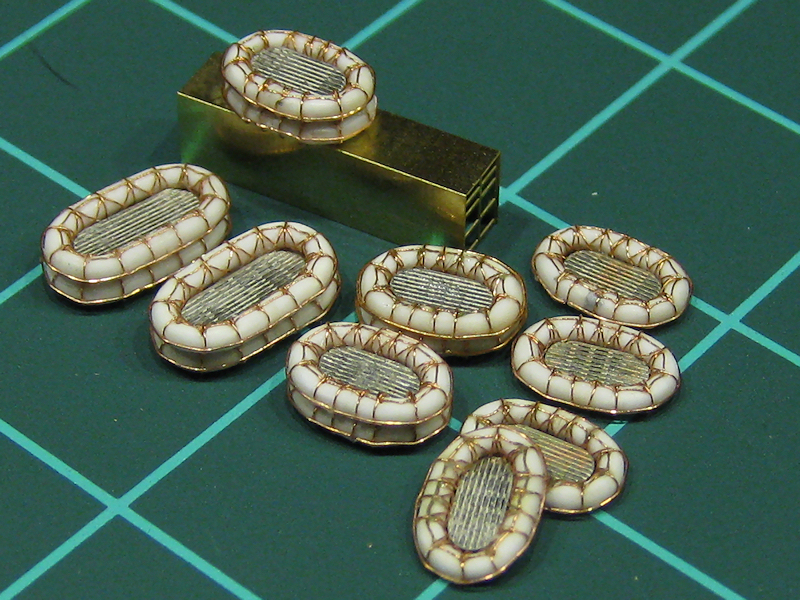 A second wire going around each float was added next. These wires are fixed with glue only and are not as ‘sturdy’ as the first wire. Some of the 5×8 and 5×10 floats were stacked. For the lower floats, on the wire you can see is actually added, not the complicated pattern. 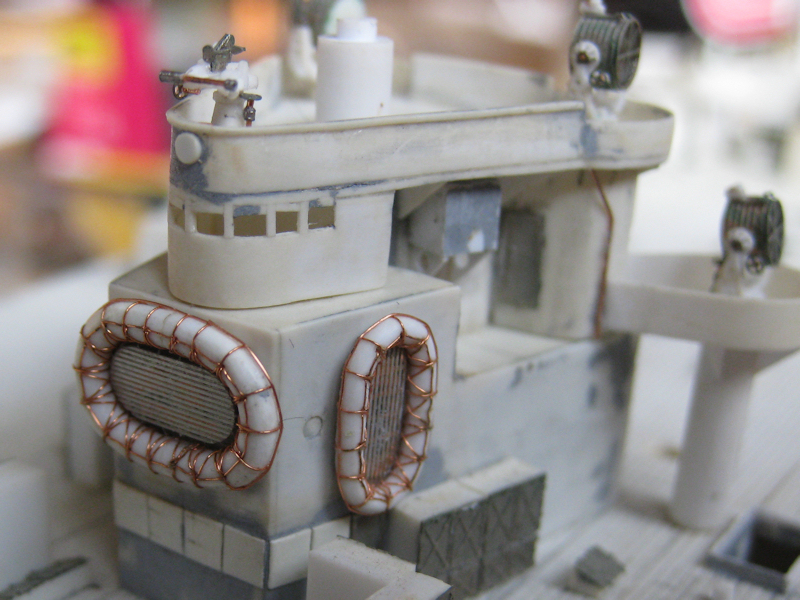 The largest float is glued directly against the aft searchlight platform; there is some room between the etched grating and the outer ring so both are glued separately. One 5×10 float is also added, leaving just enough room for the door below it to open. 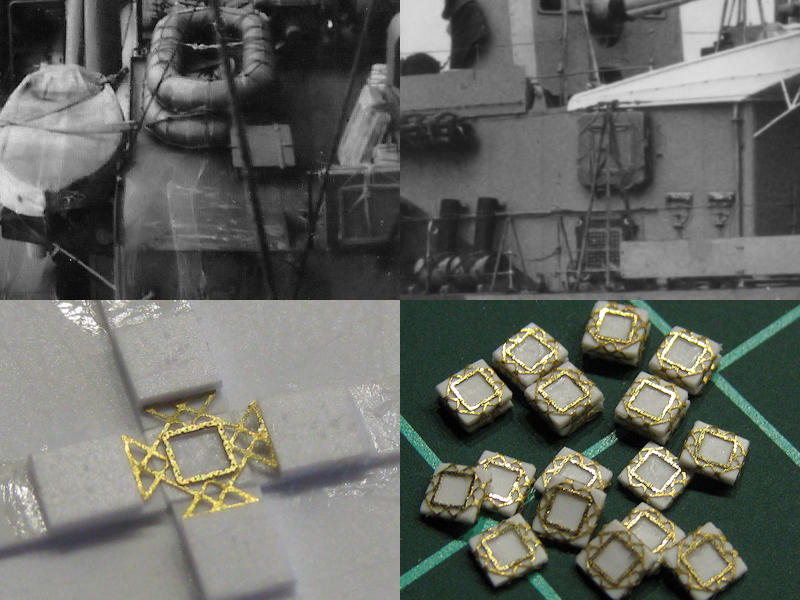 One other type of float is present aboard HMS Hood: a series of Denton Rafts. The top left image is of HMS Hood, showing the 16″ dinghy, two 5×10 Carley floats and a few Denton Rafts. The image right is the only other image I managed to find. The rafts were made from a simple piece of PE, glued to place usng a small template for easy centering. I have over 20 of these rafts to be added randomly on the structure between the funnels.