I posted a small tip how to make rings with the punch and die set (here). I made a small refinement that allows for the punching out of holes from rod or disks. For this, I used the Waldron Sub Miniature Punch & Die set (any set will do). I would advice people who want to do scratchbuilding to buy both Waldron sets (or make their own). 1) Take a styrene strip with a hole so that it can swivel around the pin of the set. The strip should be as thin as or thinner than the working material.
2) Place the strip in the set and punch out three holes. One hole is for the working disk, the other two for positioning. Do not remove the punches until all three have been used.
3) We now have a simple template that can be repositioned using the two outer punch holes.
4) Now, drill the center hole to the exact diameter of the working material. I also added to holes at the far ends of the strip and added two disks with the same height as the disk. 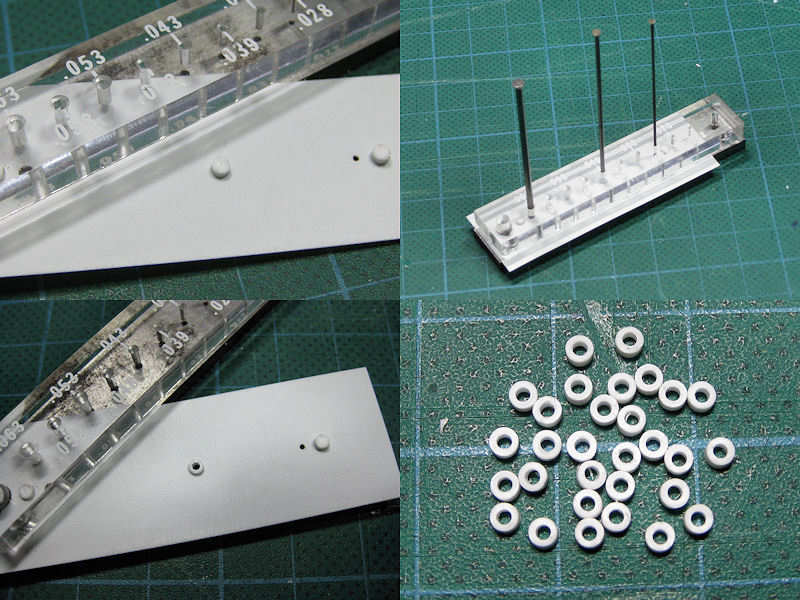 5) Insert the disk into the center hole and press it so that it positioned tightly.
6) Position the styrene strip and fix it using  the outer punches for the exact location
7) Gently punch out the center of the disk and remove all punches. Swivel the strip outwards and remove the ring.
8) Make many!

The advantage of this technique is that it works for all combinations of inner (depending on the punch & die set) and outer diameters. You only need to have the exact drill size ready, which is much easier than making sub punches on a lathe as with my previous tip. 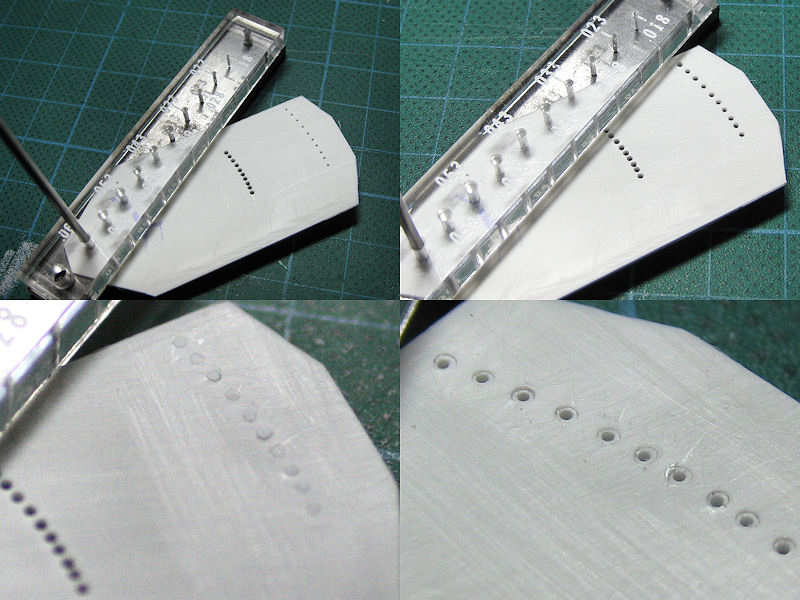 A small refinement was added to this tip. I let the styrene strip swivel around the largest punch. The second punch is taken to set the strip into position with the third punch for the actual punching. The pic shows I use an array of holes. Top left shows the positioning with the smallest punch. At top right the holes are drilled in where the rings can be positioned. Bottom left shows a series of 10 disks in place with the result shown at bottom right. From the close-up is visible that not all rings are concentrically, so you need to throw away some of them. I also marked which side of the mould is up, as reversing it results in all rings being punched off-center.