Now that my HMS Hood project has been running for ten years, I feel melancholic so I have a few historic pictures. It also answers two important questions I get from time to time: isn’t this really the model by White Ensign Models and why does it take ten years to make a model? Last question first. When I started with this model, I didn’t know how to make my own parts and had to learn. I rebuilt several parts several times. I also moved twice and had to finish my PhD. These things have a knack for declaring spare time null and void for a few years. I now have a large garden and we (Oh, got married too) occasionally spend a lot of time working around the house. Plus, my modeling has experienced many periods of months of inaction. I’m not constantly working on the model; it’s more like a plant I occasionally water…. The pictures below are a few shots I saved. The quality is not so good, but hey, so weren’t the digital cameras then… 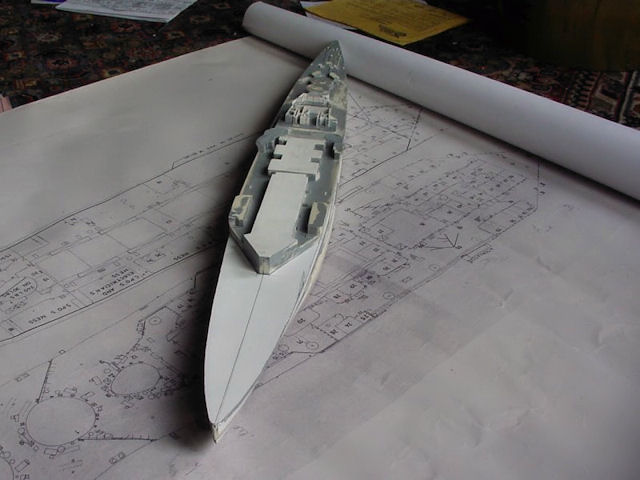 The model did start out as the model by White Ensign. I first bought the model by Iron Shipwright but was so disappointed by the quality I sent it back. The WEM model was much better but still… a few changes here and there…. Already the quarterdeck was leveled and replaced by grooved styrene. 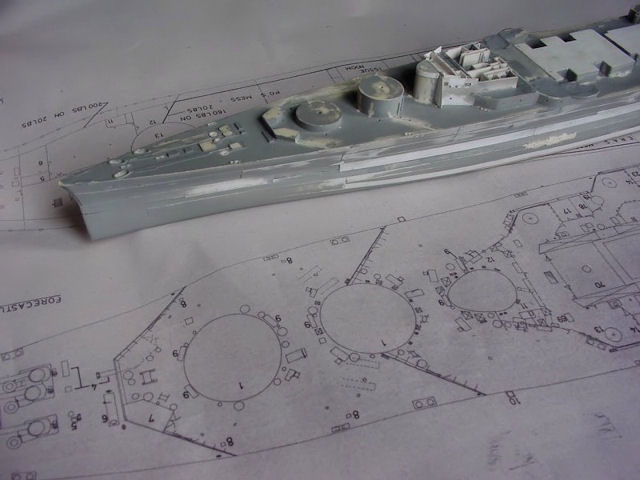 The bridge was partly replaced based on the drawings also sold at WEM’s. Still, didn’t feel quite right. 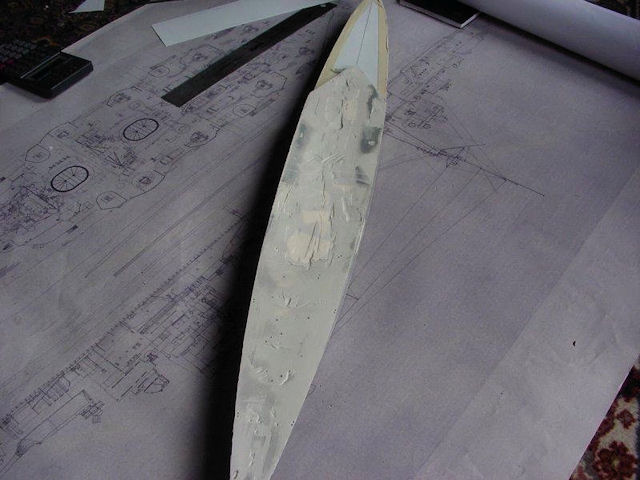 Much better! All possible sources of error removed. All WEM parts were trashed and even the etch set was declared obsolete (but found a good home). By this time you might be thinking: wasn’t that a really expensive model? Yes, it was. Nowhere near as expensive as it is now, mind you, so water under the bridge. 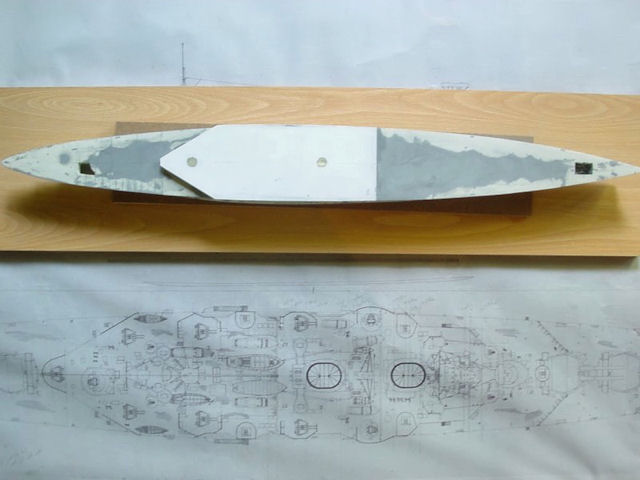 The forecastle and quarterdeck hatches were to be modeled as open, so the rooms below decks were made to scale. I now want to have HMS Hood modeled underway to intercept Bismarck with all ladders stowed, so I guess I have to close both hatches. 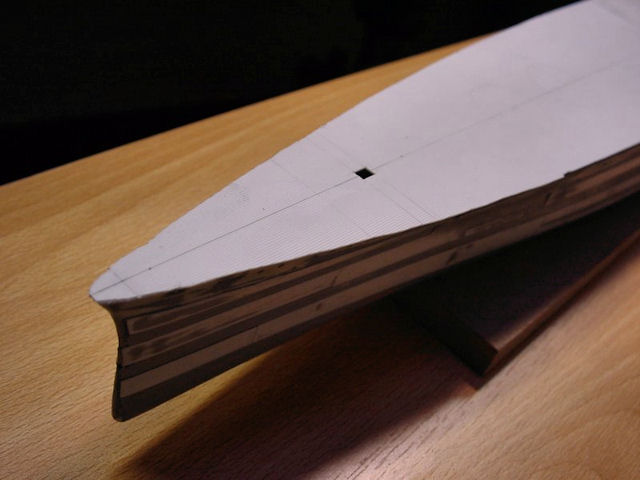 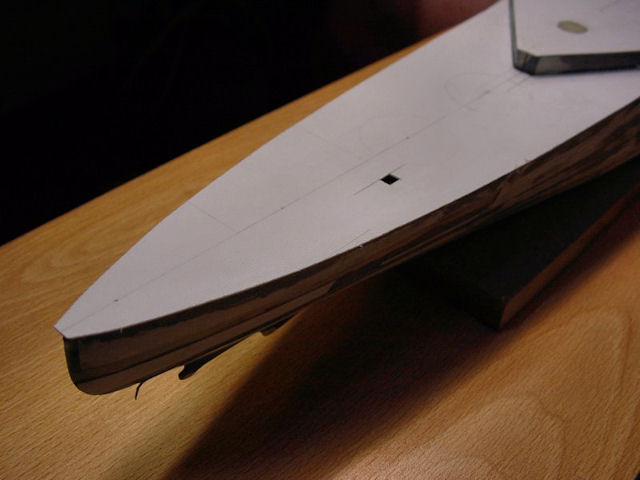 These two pics show the new grooved styrene in place. The new hull plating is visible. This was a major disaster and took a lot of time to correct. Looks alright now, but it’s still a good argument to make a waterline model! 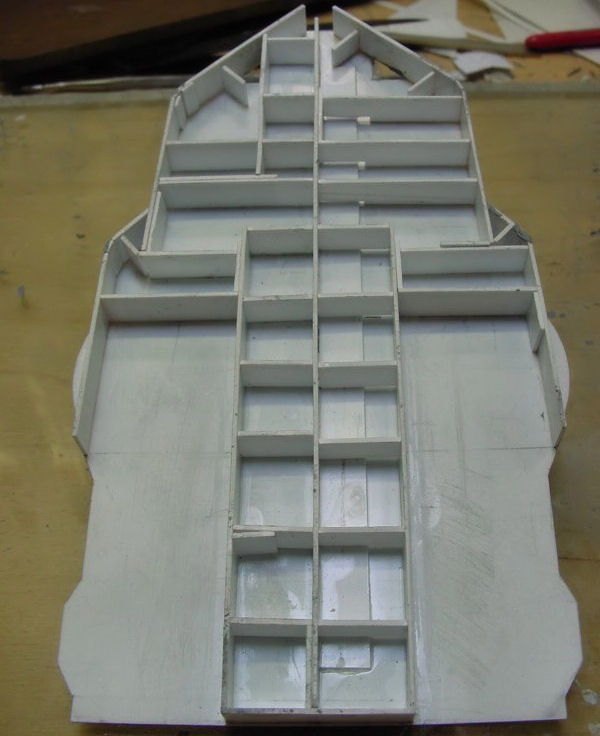 This is one of the earlier attempts at making the superstructure. It was reasonably well on its way but was later scrapped. The plating was too thin and the part is not solid enough. Nor is the current part but it doesn’t deform as much as this one. Note: this is a bad way for making a superstructure. 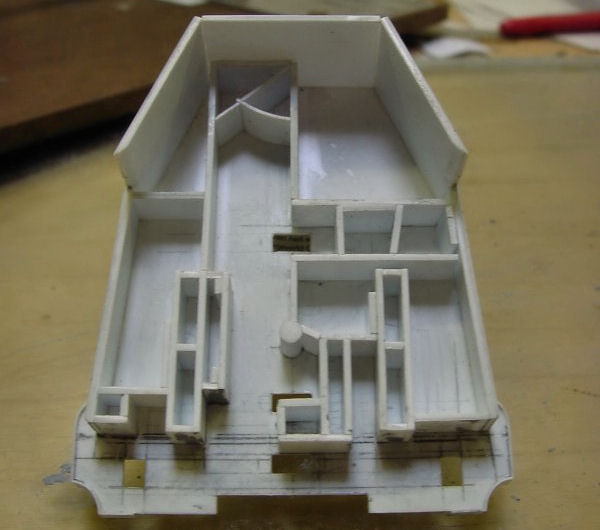 Same for this little part. In fact, the entire bridge, superstructure, funnels and aft searchlight platform were made at least once and later thrown away. No wonder the model isn’t done. 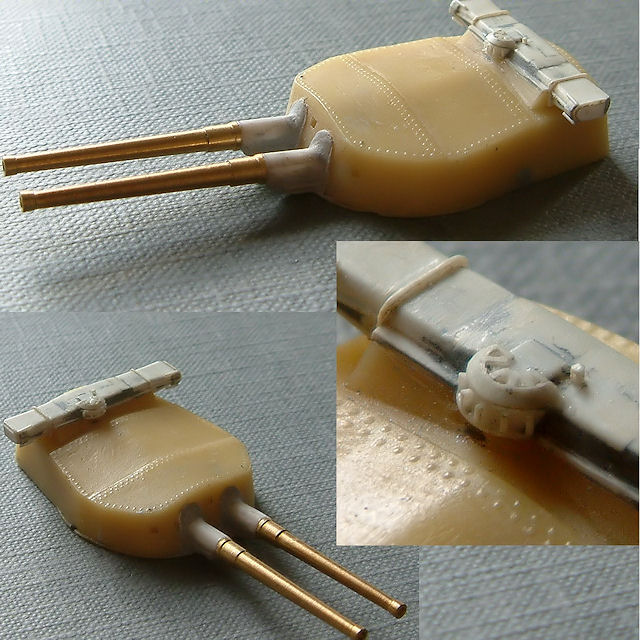 Turrets, Mk I. No, still not good enough. Who would have thought I would be sending new turrets back to WEM?

So, not counting the hull, I could have had at least two almost complete HMS Hood models done by now. But I kept the hull and that is a constant source of worry; the decks are glued in place with superglue and the thought of the failure of that bond alone… But so much work was done on the hull that I had to keep it; all the latest parts fit so nice to the old hull that I won’t risk a new one. All the armor plating was completely replaced too, so there’s a bit of resin hull in there but not on the outside. The deck problem is also fixed; the superstructure will be directly fixed into the resin with very small M1 screws (I’ll have another post on that subject later). Should have known earlier that that was a good idea, but I suppose that is part of the learning process too? For me, modeling is about recreating the parts and having fun and not about actually finishing the model. Still, I’m set of finishing it within one or two years now. That’s quite soon, isn’t it?