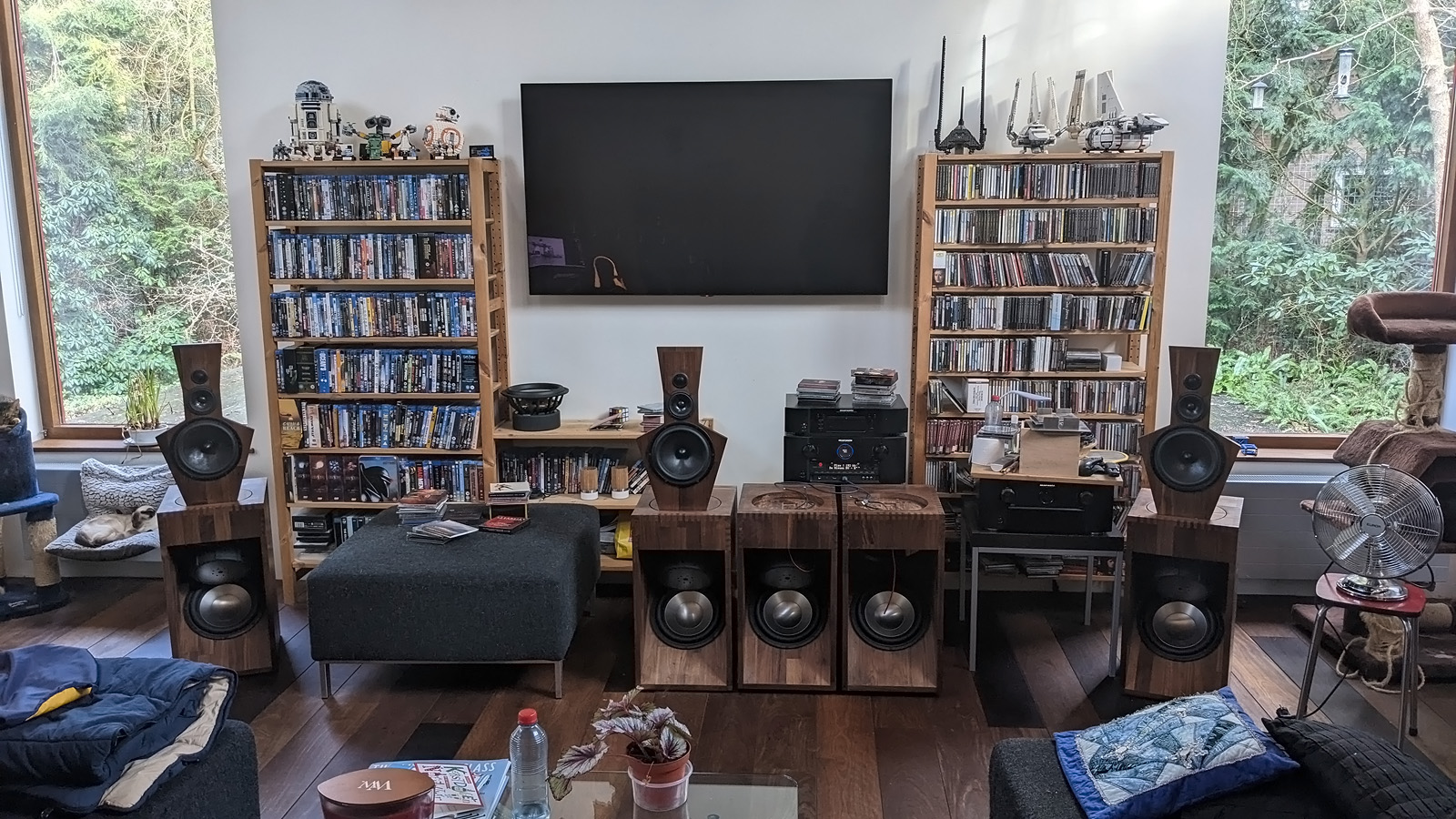 So, we have the advantage of a living room that can place five of these speakers a meter from the wall. Of course, the house we bought was selected—among others—for a large living room or possibility for a renovation. Downside is my phone can’t get the entire setup in one frame, so this is a pic during the final stages of the project. The TV is placed a bit higher than usual so completely avoid the center speaker issue and we’re quite accustomed to that now. We’ll probably upgrade the next year. Most people buy a new TV when the old one breaks down, but I find our reasons become increasing more trivial: 1) It’s not a flat screen 2) It’s not HD 3) It is only 55″ 4) Does not have eARC. 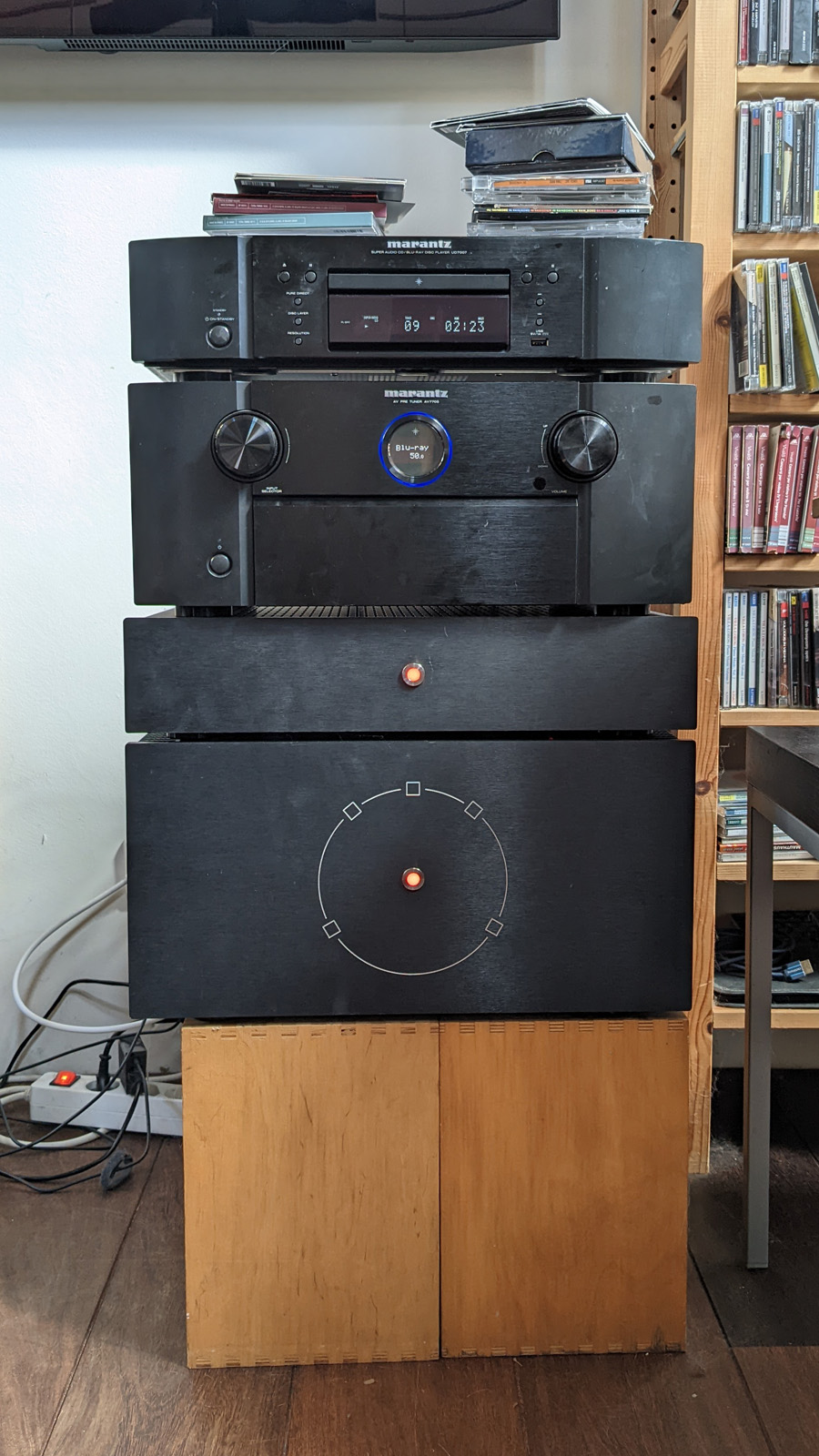 This is the audio stack with, from top to bottom, the universal disc spinner, the preamp, the filter and the amps itself.  The front LED’s were brought down to about 3V for an acceptable brightness. I’ll probably use leftover panels to make a better support block, but for now I’m going to enjoy the speakers and return to model building. The disc spinner is a bit of a worry as players that handle multichannel SACD are going extinct. Marantz has many overpriced SACD players but they are all stereo. I wish they released their “cheaper” CD player with an HDMI port and the ability to send the DSD stream; I really do not need anything else. Recently Raevon issued a two universal players, one digital only and one digital/analog out that is twice as expensive, but the digital-out version doesn’t do multi-channel DSD (edit: it does now with the updated UBR-X110) . Let’s hope this Marantz doesn’t break down any time soon. 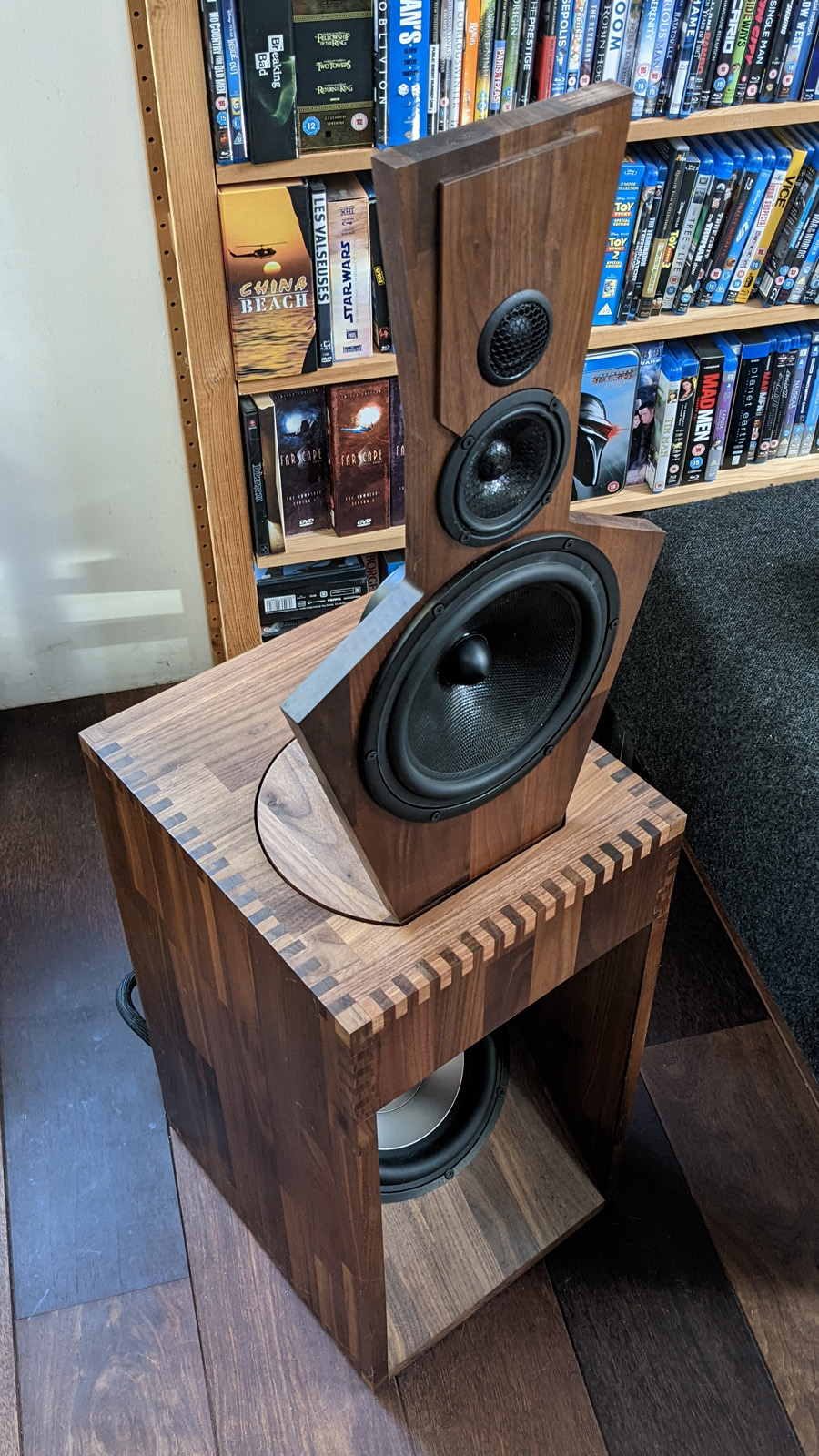 Front left speaker and the Blu-Rays behind it. We do buy the occasional disc, but the quality of streaming services seems to be better than Blu-Ray (finally) so the collection is stagnant. For Spottify & Heos these speakers show that their streaming quality is not good.  What’s even worse with Heos is that it will always select the worst quality stream available, but even at a higher bitrate it does not sound as good as the ordinary radio. Spottify announced a better quality streaming service for 2021 that didn’t happen, but I’ll probably use that money to buy more SACDs.  So I use Spottify only for background noise and my TV to stream radio. I hope Marantz will release a preamp with DAB+. 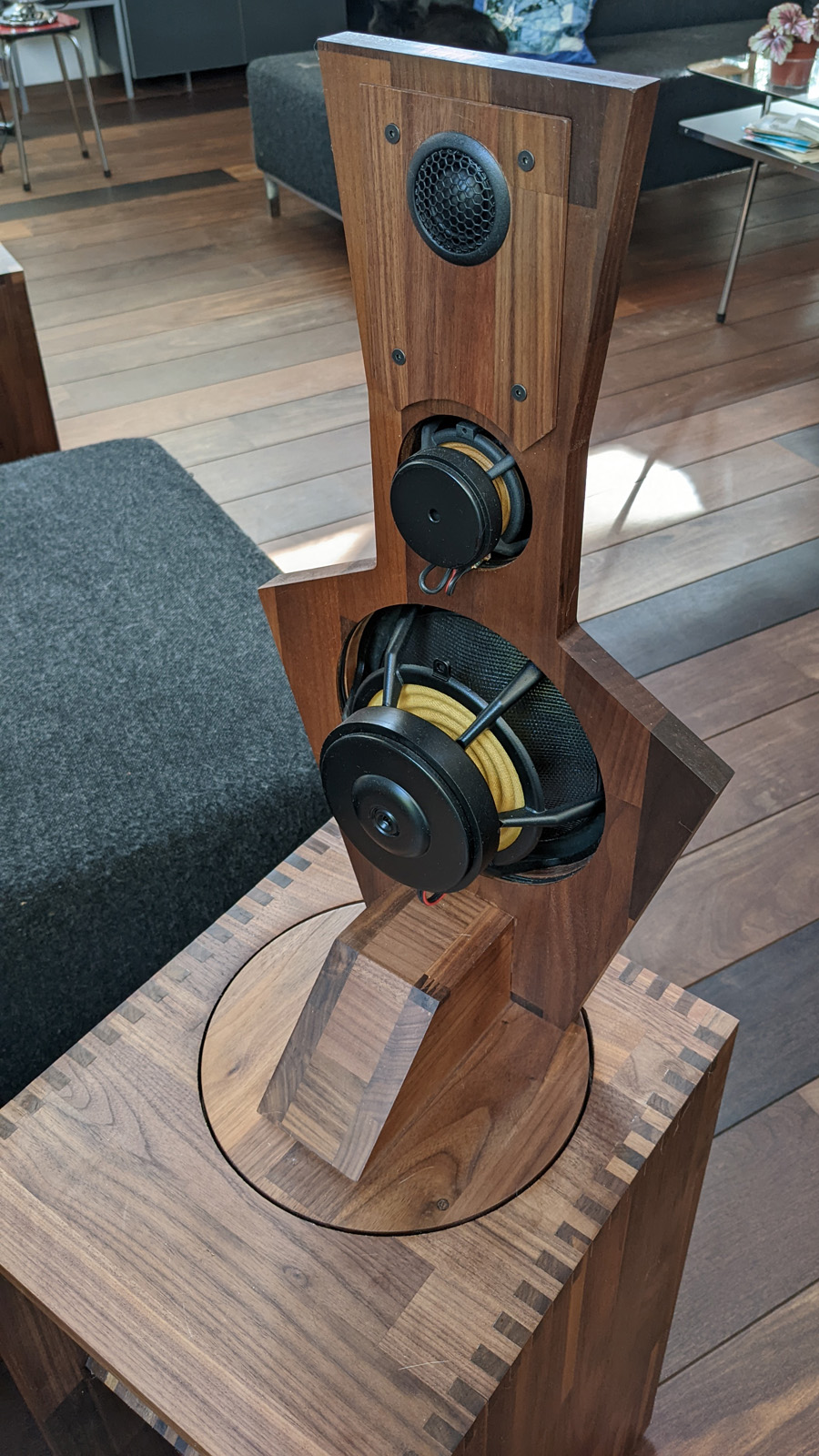 The rear of the top baffle is quite clean, only a few cables are  visible and I like look of the black magnets. You can see the cable running the upper-mid/tweeter  in the bottom corner of the low-mid cutout. 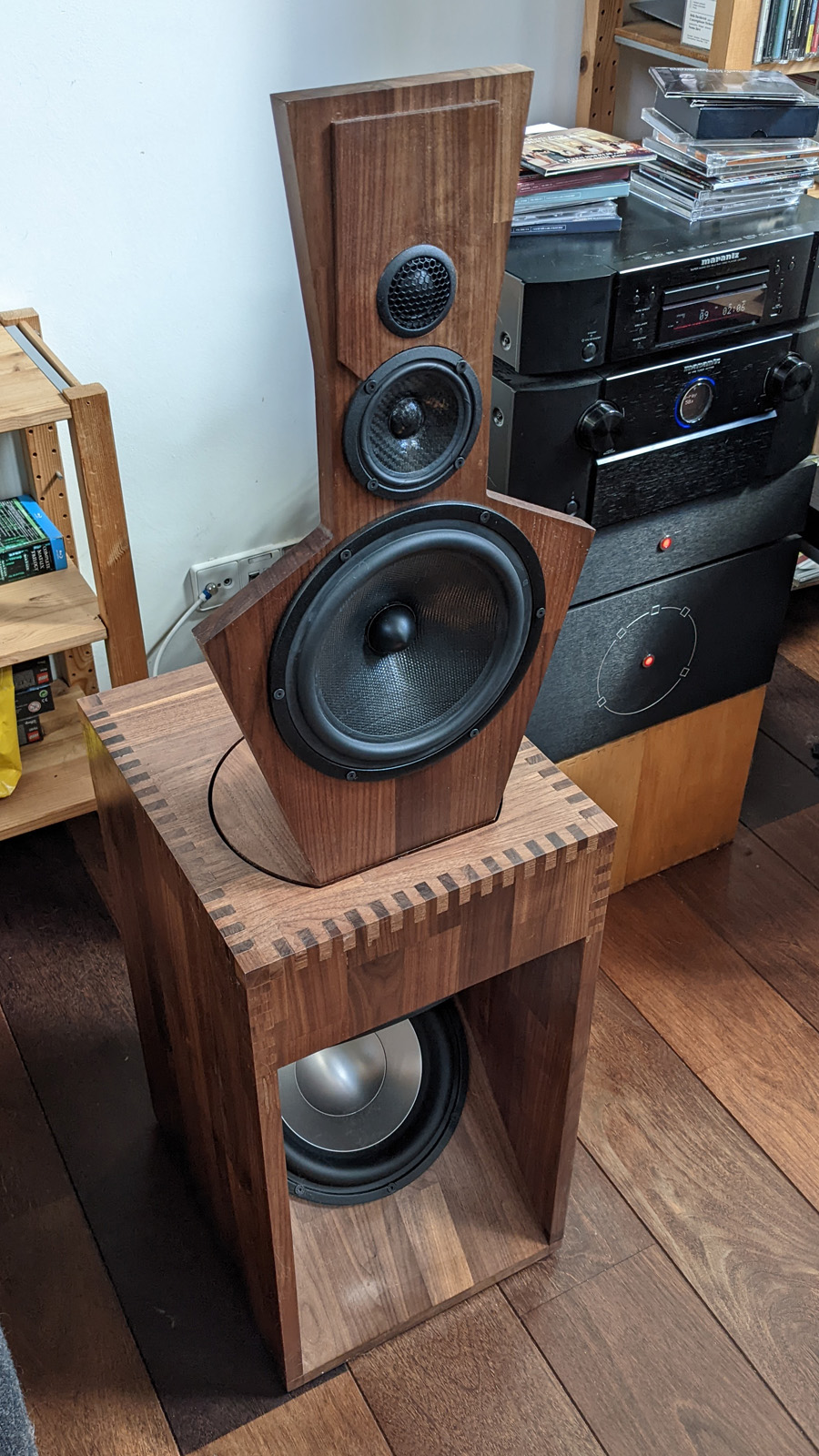 Center speaker. Now, the LX521 (and Orions) are known for creating such an impressive & immersive sound field that the center speaker is not really required. This is indeed the case provided you are sitting in the center, but for video sitting off center is really annoying. I really like the addition of the center speaker for dialogue.

When you play a stereo recording and put the preamp on multichannel stereo then the sound collapses onto the center and the sound stage becomes quite narrow (i.e. is destroyed). There is also an Auro2D setting that sends a bit  of signal to the center, not so much, while keeping the rears engaged, and this mode sounds fine. Admittedly, “plain” stereo with the LX521 sounds marginally better. 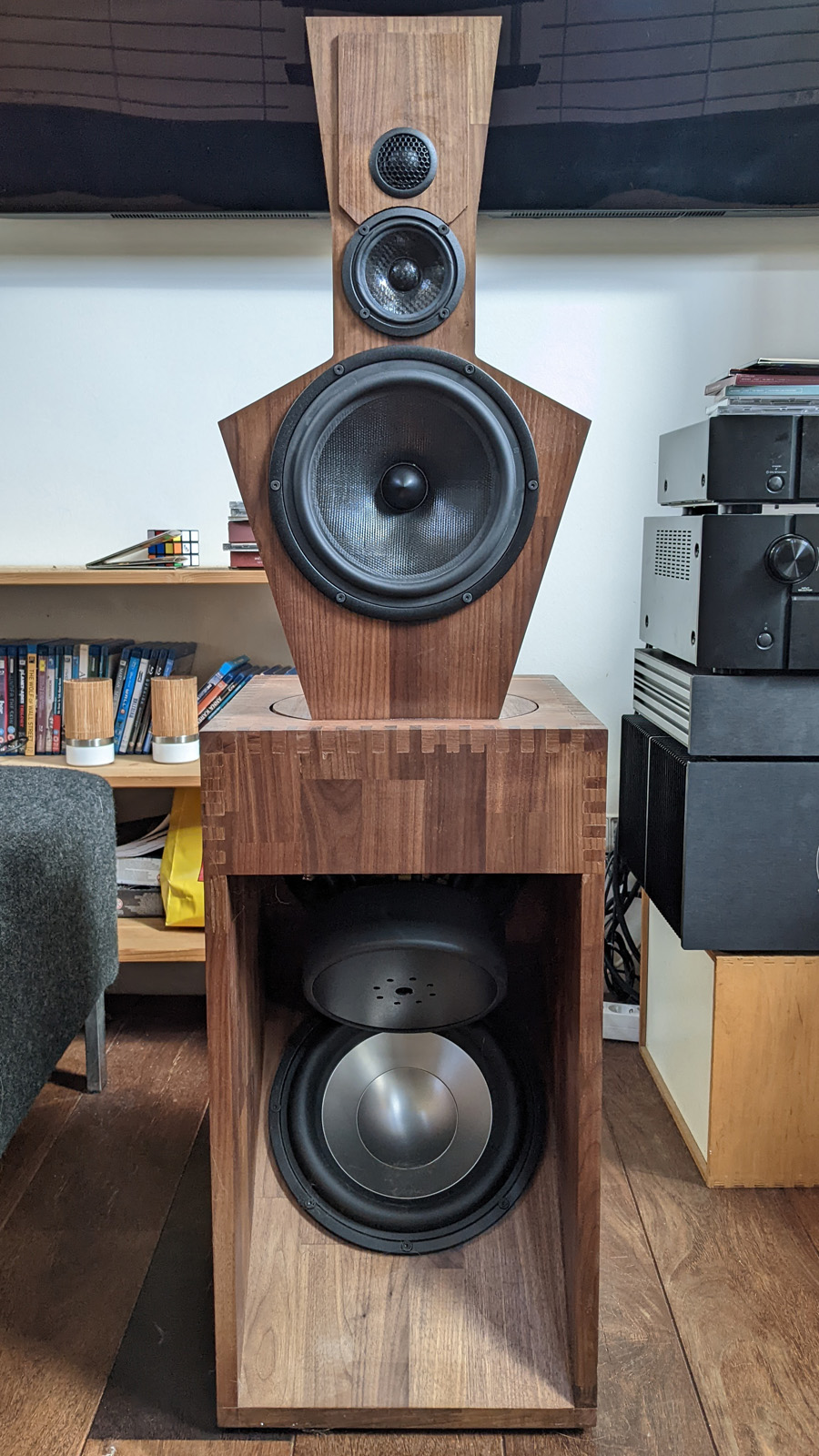 People had been experimenting with center speakers for dipole speakers concluding no added value. To me, the center speaker is most valuable for video and of little use for stereo. Front right. The speaker connection goes directly into a floor. Saves a bit of cabling here and there, mainly interesting for the rears. 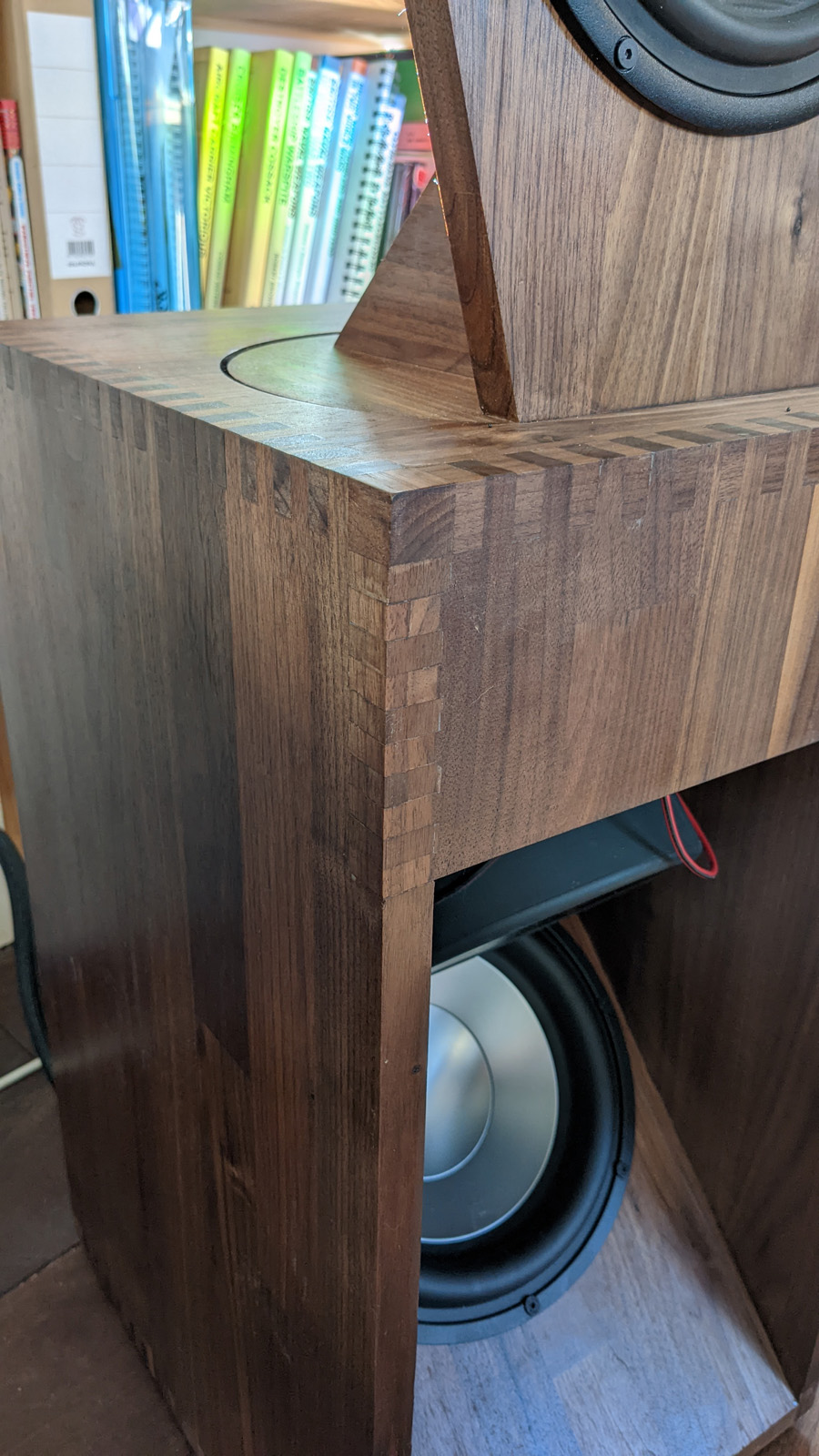 Close-up of the rear-right (small red cable was later hidden from sight). All the repair of the wood work went well enough. Using LX521s as rears is probably the most lavish addition, but I decided to not be held back by rational arguments. Finishing them in the weekends did take a toll on my overall motivation but once they were fired up all reservations disappeared. For the multichannel SACDs the sound field is absolutely wonderful and for a video with a good sound track the experience is glorious. 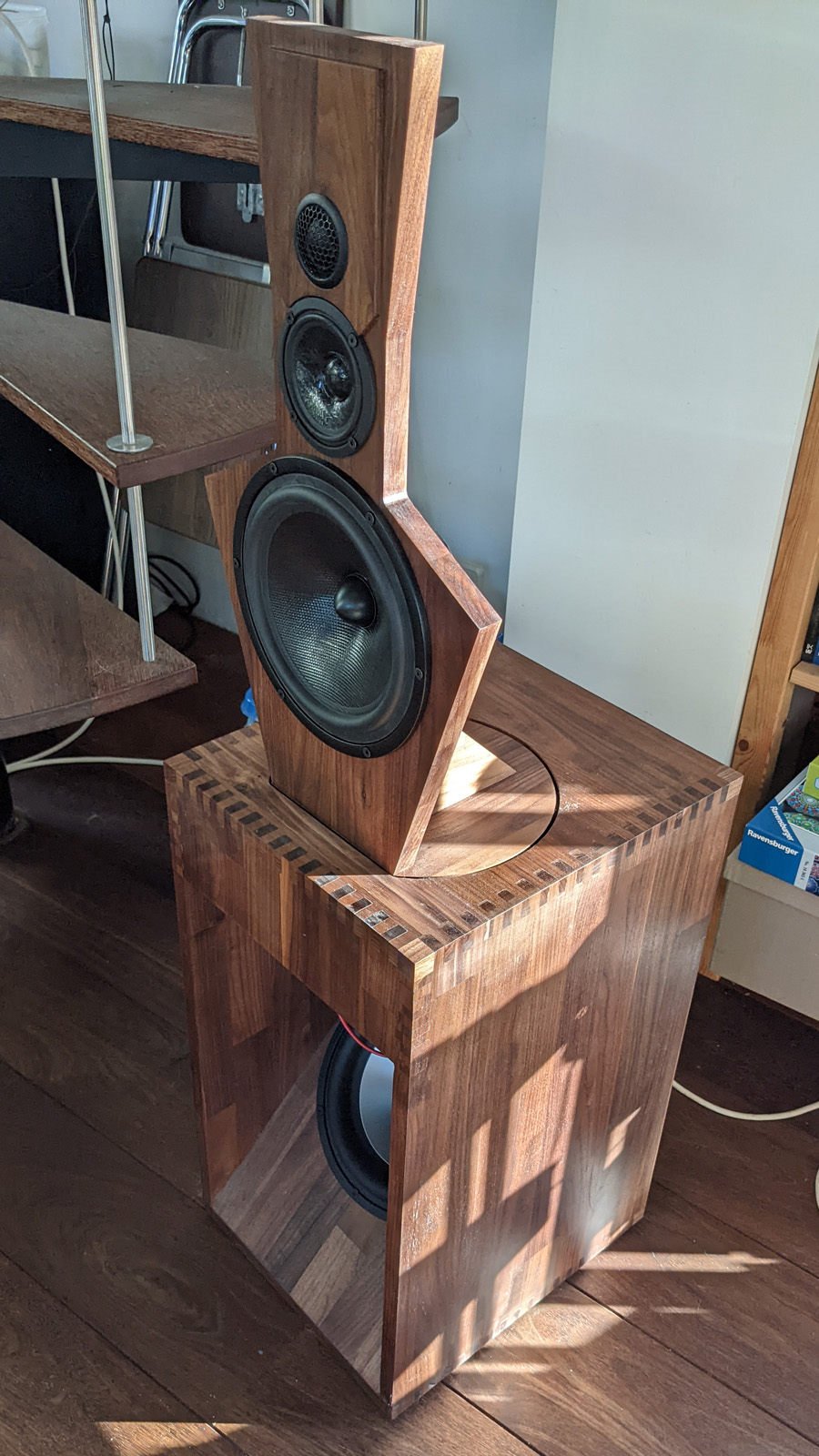 Another shot of the rear-right bathing in sunlight, and highlighting all the imperfections in the woodwork. I may have to give them another sanding pass with a very fine grit. 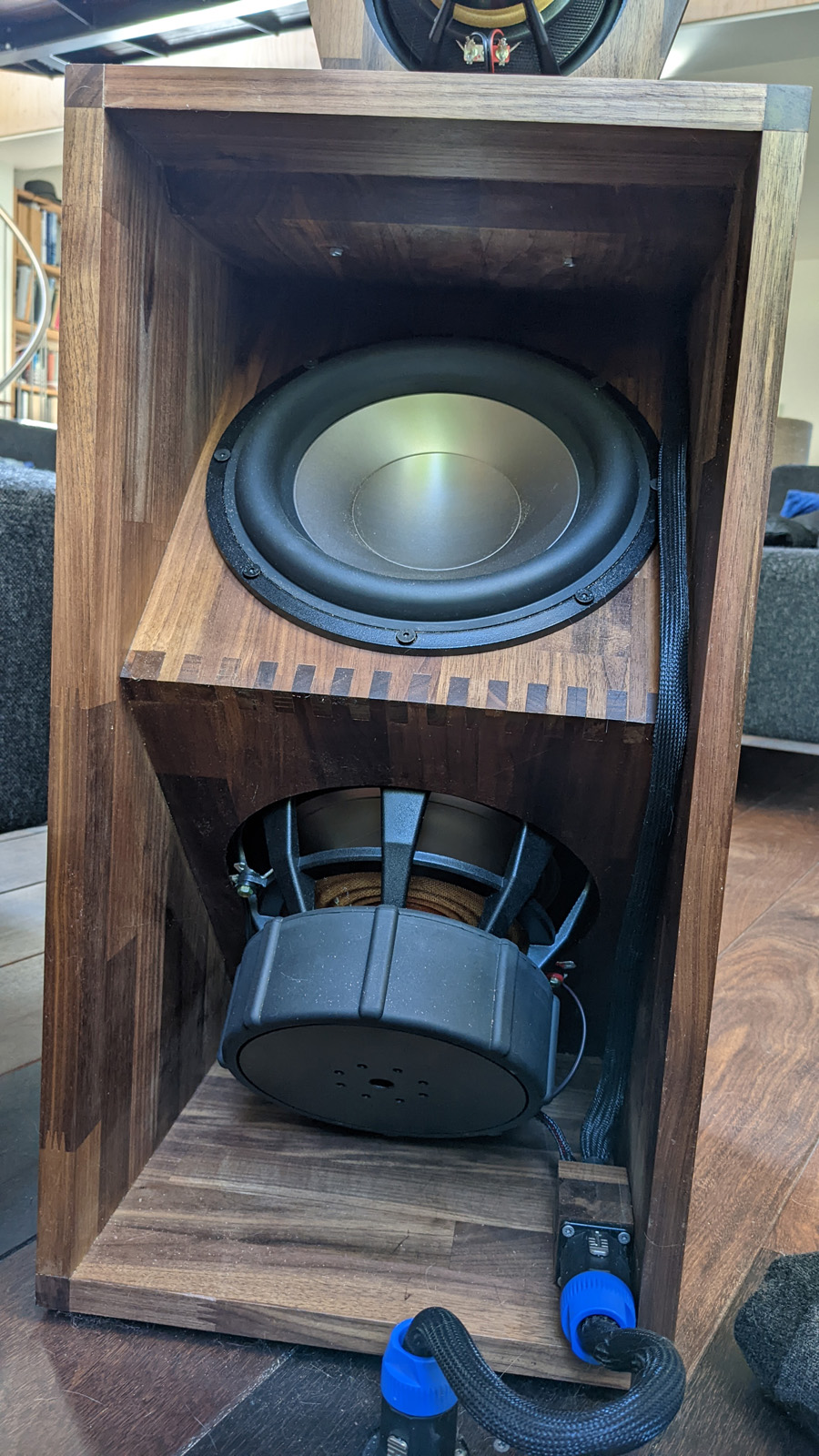 Shot from the rear; this part is visibly quite inaccessible, so internal cabling would not be really worth it. At the top you can see the additional panel that supports the top baffle, plus two M4s keeping the baffle in place. The main cable enters the top of the speaker at the for top right. If I had to build another set, then I’d probably move that entry point a bit more to the center, so that the cable can be added after the entire cabinet was assembled. Now the cable has to make a sharping bend and is glued between two panels, also meaning that the cable is dangling in the way while constructing the speaker.